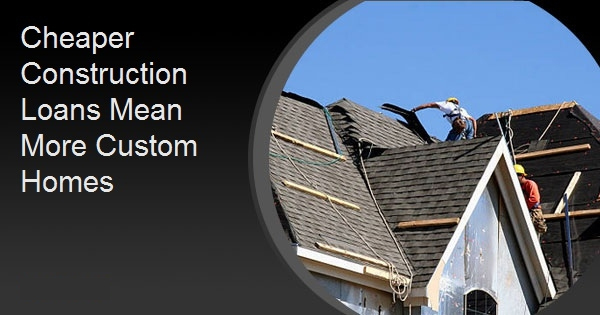 Builders are finding that acquisition, development, and construction (ADC) loans in the last half of 2019 were both easier to access and less costly. That may be, in part, behind a fourth quarter 2019 surge in custom home building.

The National Association of Home Builders' (NAHB's) quarterly survey of its builder and developer members found that the average interest rate on ADC loans declined in Q4 from 6.39 to 6.13 percent on loans for land acquisition and from 6.31 to 5.94 percent on development loans. Loans for single family spec construction declined 36 basis points to 5.63 percent and from 5.63 percent to 5.38 percent for pre-sold homes. It was the second consecutive quarter in which rates for all four loan categories declined.

NAHB notes that, because ADC loans are typically short term, three years on average, points charged on the loans can be more important than the rate on the portion of the loan drawn down. Points on construction loans declined on average, from 0.92 to 0.82 percent on spec loans and from 0.74 to 0.64 percent on pre-sold loans. The trend for acquisition and development loans, however, moved in the opposite direction. On average they increased from 0.84 to 1.10 percent on the former and from 0.71 to 1.10 percent on the latter. Answers to other questions on the NAHB survey indicate that availability of credit for AD&C has improved slightly. The net tightening index derived from the survey was -20.3 in the fourth quarter of 2019, compared to -10.3 in the third quarter.  A similar index from the Federal Reserve's survey of senior loan officers still showed net tightening, although to a lesser extent than previously, going from +16.2 in the third quarter of 2019 to +7.4 in the fourth quarter. Both indices are constructed so that negative numbers indicate easing of credit, with larger (in absolute value) negative numbers indicating more widespread easing.

In a separate analysis of census data, NAHB found that custom building expanded during the fourth quarter of last year, with 44,000 custom building starts. This was a 16 percent increase from the same quarter in 2018. Over last year's four quarters there were 177,000 custom starts. However, because of weakness in the first half of the year, this was only a 3 percent gain from the 172,000 starts over the entirety of 2018. NAHB's definition of "custom" is a house built on the eventual owner's land without ever being for sale. As measured on a one-year moving average, the market share of custom home building in terms of total single-family starts is now 20 percent, down from a cycle high of 31.5 percent set during the second quarter of 2009.

Prior to the housing crisis, the share of homes built on owners' land had been declining for 15 years. As builders pulled back on spec building in 2006 and 2007 and the availability of ADC loans tightened, the market share of this not-for-sale new housing increased. The share had been declining again as overall single-family construction accelerated.