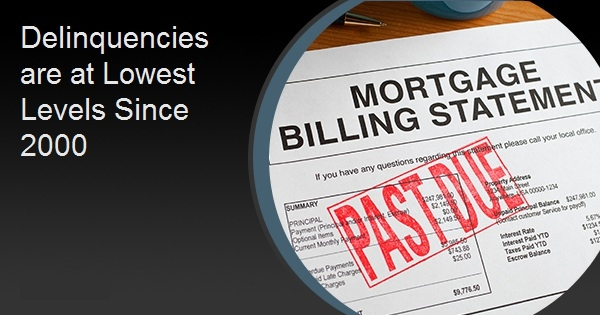 Delinquencies are at Lowest Levels Since 2000

Tighter underwriting and a strong economy seemingly continue to be reflected in mortgage loan performance. In its "first look" at January loan data, Black Knight says the national delinquency rate hit the lowest level since they began tracking it in 2000. The rate, 3.22 percent, represents a 5.4 percent decline from December and 14.2 percent year-over-year. The company says the annual figure shows that the rate of improvement in delinquencies has been picking up speed in recent months and this was the largest drop in more than a year.

That percentage change translates to a 98,000 decline in a single month in the number of loans that are 30 or more days past due but not in foreclosure. The annual decrease of nearly a quarter million (240,000) loans results in a current population of 1,705,000 loans in that 30-day bucket. Serious delinquencies, those more than 90 days past due but not in foreclosure, fell by 8,000 and 85,000 over the two periods to 419,000.

Foreclosure starts rose by 8.35 percent from December with 42,800 loans entering the process. Starts were, however, down 14.7 percent year-over-year.

The number of loans in foreclosure was relatively unchanged during the month, dipping by 1,000 compared to 246,000, 0.46 percent of active mortgage loans. The foreclosure inventory has shrunk by 19,000 loans since January 2019.

The number of non-current loans in all stages stands at 1.95 million, 259,000 fewer than a year earlier. This is the first time that number has fallen below 2 million since March 2005.

The frantic pace of prepayment at the end of last year eased further in January, down 15 percent to a rate of 1.26 percent. This is still 113 percent higher than last January.

Black Knight will take a more detailed look at its January data in the next issue of it Mortgage Monitor. It will be released on March 2.