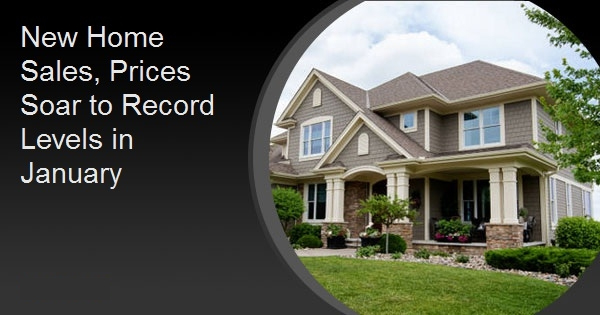 The Mortgage Bankers Association (MBA) said information from its January Builder Application Survey shows applications to finance new home purchases surged 40 percent from December and were 35.3 percent higher than in January 2019. This change does not include any adjustment for typical seasonal patterns.

Based on this data, MBA estimates new single-family home sales were running at a seasonally adjusted annual rate of 865,000 units in January compared to 689,000 units the prior month. On an unadjusted basis the estimate is for 66,000 home sales up 37.5 percent from the 48,000 transactions in December. The new home sales estimate is derived using mortgage application information from the BAS, as well as assumptions regarding market coverage and other factors.

"New home applications and sales activity surged in January. This was a continuation of the end of 2019, which saw strong residential construction and increased purchase applications activity," said Joel Kan, MBA's Associate Vice President of Economic and Industry Forecasting. "Even with some global and domestic economic uncertainty, builders have ramped up production in recent months to meet increased homebuyer demand."

Added Kan, "MBA estimates that January new home sales increased 25 percent over the month to a sales pace of 865,000 units, while the average loan size increased to $346,000 - both record highs since the survey began in 2012."

MBA's Builder Application Survey tracks application volume from mortgage subsidiaries of home builders across the country. Official new home sales estimates are conducted by the Census Bureau on a monthly basis. In that data, new home sales are recorded at contract signing, which is typically coincident with the mortgage application. Census Bureau data for January will be released on February 25.