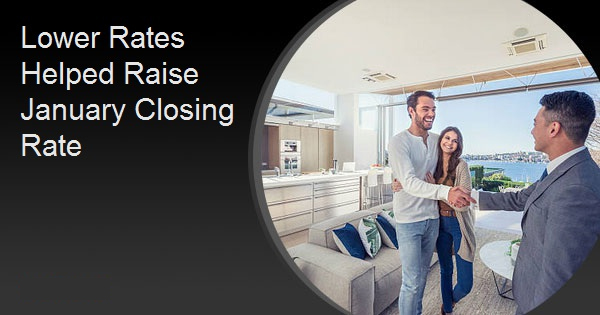 The slight drop in mortgage rates in January stabilized refinance originations according to the January Origination Insight Report from Ellie Mae. The 3 basis point dip to an average rate of 3.96 percent kept the refinancing share of closed loans at 46 percent, unchanged from December. Conventional loan refinances increased from 53 percent in December to 55 percent in January, while the refinance share of VA and FHA loans declined by 4 and 3 percentage points respectively.

Conventional loans accounted for 71 percent of all loans closed during the month, up 1 point. FHA's 16 percent share was 1 point lower than in December as was the 8 percent share of VA loans. Adjustable rate mortgages had a 6.3 percent share, up a point from December.

"The start to 2020 saw interest rates decline and refinances hold steady, driving an increase in our closing rate to 78.2 percent in January," said Jonathan Corr, President and CEO of Ellie Mae. "All indicators show that we will continue to see a healthy housing market in 2020 as more millennials look to purchase homes and interest rates remain at historic lows driving refinance activity. We do expect 2020 to bring some challenges for homebuyers, not because of what they can afford but rather what they can find due to lagging inventory."

The Origination Insight Report mines data from a sample of approximately 80 percent of all mortgage applications that were initiated on its mortgage management system. Ellie Mae says its report is a strong proxy of the underwriting standards employed by lenders across the country.