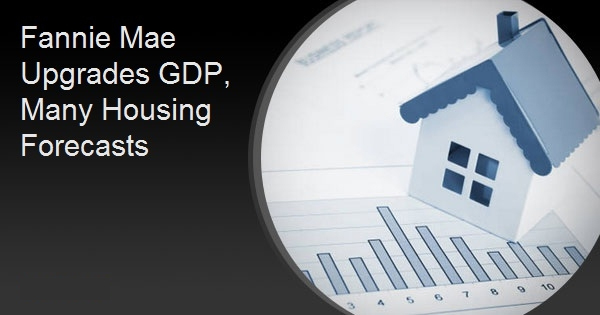 annie Mae says the U.S. economy appears to be sustaining itself despite both the problems faced by Boeing and the fears about the global impact of the coronavirus. The company's Economic and Strategic Research (ESR) group is upgrading its forecast for business fixed investment (BFI) in the second half of 2020 and beyond and have upgraded expectations for the GDP in both 2020 and 2021 by a tenth percent to 2.2 percent and 2.1 percent respectively. The company's economists also expect greater strength in every part of the housing market over the next 18 months.

The group did substantially downgrade their annualized GDP forecast for the first quarter of this year from 2.3 percent to 1.9. They state that this does not reflect a change in their view of underlying growth but rather that expected government spending and housing construction were partially realized in the last quarter of 2019 and that the abnormal growth in net exports over the fourth quarter will be reversed. The 2nd quarter forecast remains at 2.0 percent, but they expect considerable improvement in the second half of the year due to the aforementioned gains in BFI and net exports as Boeing resumes production of its grounded aircraft.

Downside risks include uncertainty over both Boeing and the coronovirus as well as election year concerns. Upside risks include a reversal of the modest increase in the savings rate which could fuel consumption and the possibility that global monetary stimulus programs might revive economic growth more quickly than expected.

The concerns emanating from the disappointing December jobs report were erased by a solid 225,000 number in January and more than 20,000 new jobs were created in residential construction (including specialty contractors), the largest gain in a year, consistent with recent strength in housing starts and continued homebuilder confidence.

The statement released following the January meeting of the Federal Open Market Committee (FOMC), and Chairman Powell's later remarks, indicated that the Fed wants to see inflation at its 2.0 target. The PCE price index rose by just 1.6 percent in December from a year earlier and Fannie Mae is forecasting another 0.1 percent decline this year. Still, the risks from a further cut in the federal funds clearly continues to outweigh the risk of an increase and Fannie's economists continue to believe the rate will remain at its current 1.5 to 1.75 percent level for the near future.

The report notes that last month's edition predicted strengthening December housing activity but the Census numbers for new construction and existing home sales exceeded them. However, the ESR group believes the end-of-year activity is unsustainable and they expect some pullback in coming months.

Housing activity will remain solid and add to overall growth. Residential fixed investment will grow 3.9 percent, recovering from a 0.1 percent contraction in 2019.

The 16.9 percent December surge in housing starts in pushed the annualized rate to 1.61 million, the fastest since 2006, driven by both single-family and multifamily construction. However, the unseasonably warm weather and holiday related variations may have inflated the numbers. Also, the much smaller increase of 0.8 percent in single-family permits suggests that the underlying construction trend is strengthening more modestly than implied by starts. The economists say that during the expansion, whenever the ratio of starts-to-permits reached a level near what occurred in December, starts have always pulled back meaningfully the following month. The forecast for single-family starts this year have been modestly increased to 1 million annualized units by the end of the year, but Fannie Mae predicts a significant decline from the December pace in this week's Residential Construction report for January will lead to a slight drop in the first quarter. Multifamily housing starts also surged in December, rising 29.8 percent to a pace of 553,000 annualized units, the fastest since 1986 and well above expectations. Multi-family numbers are much more volatile than single-family, and permits fell by 11.0 percent after two months of solid increases. While demand for multifamily housing remains strong, the expectation is for a significant pullback in starts in coming months but for the year Fannie's forecast for multifamily starts has been raised from 385,000 to 403,000. Sales of new homes in 2019 were strong as builder drew down on existing inventories, but with the supply back under 6-months, sales will be constrained by the pace of building more. Those sales dipped 0.4 percent in December to an annualized pace of 694,000 units, with net negative revisions to previously reported data.

Sales of existing homes ended the year more strongly than expected, rising 3.6 percent in December to 5.54 million annualized units, the fastest pace since February 2018, but that pace seems  unsustainable as the inventories of existing homes continued to tighten: falling to just a 3.0 month supply, a record low since the number was first tracked in 1999. Moreover, the December Pending Sales Index, which leads existing home sales by about 45 days on average, plunged 5.3 points in December to the lowest level since February 2019, suggesting a pullback to begin the year. Based on this data, Fannie Mae slightly increased its existing home sale forecast in the first quarter and expects modest quarterly declines the rest of the year.

Freddie Mac's average 30-year fixed mortgage rate fell 10 basis points in January to 3.62 percent, and then to 3.45 percent in the first week of February, which, if maintained through the month, would be the lowest level since August 2016. The recent decline in mortgage rates has helped drive a surge in refinance applications, which jumped 33 percent in January according to the Mortgage Bankers Association. February activity should be similarly strong. The forecast is for Treasury rates to rise as coronavirus-related worries recede, but any growth in the 30-year mortgage rate will likely be comparatively subdued.

The jump in refinance applications has pushed mortgage lenders' production capacity close to its limits and appears to have increased lending pricing power. The primary spread between mortgage rates and the 10-year Treasury rate is now nearly 20 basis points higher than the business-cycle average. Once refinance demand slows, lenders are likely to reduce rates to compete for volume, narrowing the primary spread. Thus, the current low mortgage rates may be maintained in coming months even if the 10-year Treasury rises modestly. Tight inventories coupled with lower mortgage rates continues to boost home prices. The S&P CoreLogic Case-Shiller National House Price Index rose 3.5 percent in November from a year prior, the fastest annual pace since April 2019, and the December CoreLogic National House Price Index was up 4.0 percent from a year prior, an acceleration from 3.5 percent in November.