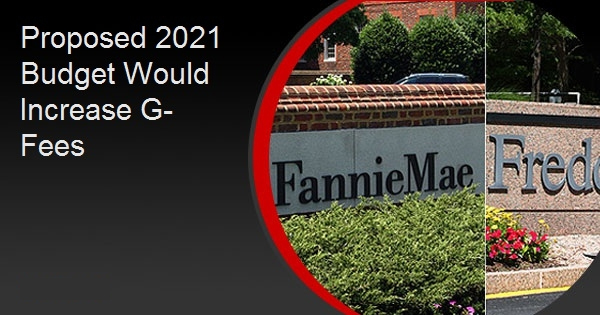 The 2021 Federal Budget prepared by the White House is given little chance of passing Congress but there are a couple of provisions buried in the hundreds of pages of text that might be of interest to MND readers.

One is a 10-basis point increase in g-fees, the guarantee fees the government sponsored enterprises (GSEs) Fannie Mae and Freddie Mac charge lenders for guaranteeing loans. The White House estimates the new fee will generate $34 billion over the next 10 years.

The current fee averages about 55 basis points including a 10-basis point fee put in place in 2011 to fund the Temporary Payroll Tax Cut. Legislation enabling that fee will expire in 2021 and it is estimated to have generated $31 billion over the last ten years. What is unclear is whether the new fee would be in addition to the "temporary" fee or if it will be allowed to expire.

The relevant portion of the proposal reads:

"Under current law, Fannie Mae and Freddie Mac... impose a 0.10 percentage point fee above and beyond their normal guarantee fees that is collected and remitted to the U.S. Treasury for deficit reduction pursuant to the Temporary Payroll Tax Cut Continuation Act of 2011 (TPTCCA). This existing TPTCCA fee is currently in effect through 2021 and generates approximately $31 billion in deficit savings over the 10-year Budget window. This proposal, projected to generate an additional $34 billion, would help to level the playing field for private lenders seeking to compete with the GSEs."

G-fees have become a bit of a go-to for congressional "pay fors." In both 2015 and 2017 the Senate tried to add a 10-basis points to partially fund a highway construction act.

The second budget item that caught our eye is a cut in funding and partial restructuring for the Consumer Financial Protection Bureau (CFPB). The agency, created by the Dodd-Frank Wall Street Reform and Consumer Protection Agency, derives its funding from the Federal Reserve, independent of congressional appropriations. The White House proposal would subject the CFPB to discretionary appropriations starting in 2022 and would cap transfers by the Federal Reserve Board to the CFPB during 2021 to $485 million, equivalent to the 2015 level. The budget reductions over the next ten years would total $6.4 billion.