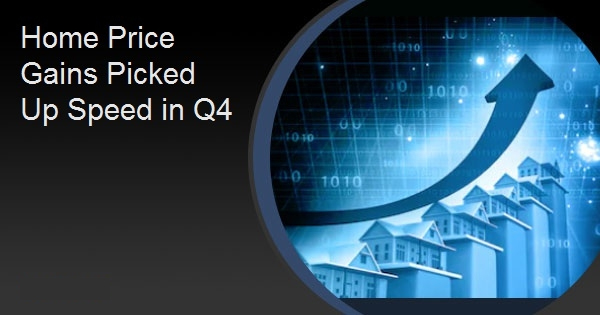 Inventory issues remain a major concern and are pushing home prices in urban America still higher. The National Association of Realtors'® (NAR's) quarterly report on metropolitan home prices says 170 or 94 percent of the 180 metropolitan statistical areas (MSAs) it tracks, posted appreciation in their median home price during the fourth quarter of 2019. Ninety-three percent had gains in the third quarter.

The national median existing single-family home price was up 6.6 percent from the median of $258,000 a year earlier. The annual rate of appreciation was 5.1 percent in the third quarter.

"It is challenging - especially for those potential buyers - where we have a good economy, low interest rates and a soaring stock market, yet are finding very few homes available for sale," said Lawrence Yun, NAR chief economist. "We saw prices increase during every quarter of 2019 above wage growth."

Prices rose by double digits in 18 metro areas. Notable increases included an 18.2 percent increase in Trenton, 13.7 percent in Boise and just over 11 percent in Gulfport-Biloxi, Kingston, New York; and Albuquerque.

"Rising home values typically create wealth gains for existing homeowners, however, areas that are deemed 'too expensive' will obviously have trouble attracting residents and companies looking to do business there," Yun said. "We need a good balance that benefits both current and future homeowners, but right now, the balance is still in favor of home sellers."

Among the 10 most expensive MSAs, San Jose was the only one where home prices declined - a tiny 0.3 percent change to a median of $1.246 million - and Honolulu's prices were flat at a median of $812,600. The San Francisco median gained 3.9 percent, Anaheim-Santa Ana prices were up 3.6 percent, the gain was 4.6 percent in San Diego, 7.2 percent in Los Angeles, and 6.4 percent in Boulder. Seattle, where prices had been trending lower posted an 8.0 percent annual appreciation during the quarter.

But, as Black Knight and CoreLogic have also pointed out, as prices have moved higher, falling mortgage rates have actually made homebuying more affordable. The income required for a family to qualify for a mortgage on a median priced home was $48,960 in the fourth quarter compared to $52,896 a year earlier. At the same time, median income increased from $77,093 to $79,741. This means a family must commit 15.3 percent of its income to a mortgage payment, down from 17.2 percent in the last quarter of 2018.

The picture also brightened for first-time homebuyers. The median price of a starter home was $233,800 and the monthly mortgage payment was $1,006 with 10 percent down. The qualifying income for that house in the fourth quarter was $48,288, almost $600 less than the previous quarter.