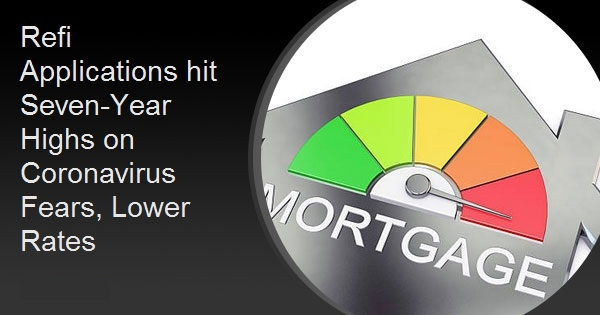 Applications for mortgage financing increased again during the week ended February 7 despite a significant decline in those for home purchases. The Mortgage Bankers Association (MBA) said its Market Composite Index, a measure of mortgage loan application volume, rose 1.1 percent on a seasonally adjusted basis from one week earlier and 3 percent on an unadjusted basis.

Refinancing was up for the third straight week, adding 5 percent to that index which is now 207 percent higher than on an annual basis. The share of applications that were for refinancing grew to 65.5 percent; 1 percentage point higher than the prior week.

"The mortgage market continues to be active in early 2020, as applications increased for the third straight week. Rates also rose, but still remained close to their lowest levels since October 2016," said Joel Kan, MBA's Associate Vice President of Economic and Industry Forecasting. "The refinance index climbed to its highest level since June 2013, and refinance loan sizes also increased as a result of an active jumbo lending market."

Added Kan, "Last month was the strongest January for purchase applications since 2009, which is perhaps a sign that mild weather brought out prospective buyers earlier than normal. Despite a decline last week, purchase activity was still up almost 16 percent from a year ago."

Rates for fixed rate mortgages were up slightly on a contract basis and most effective rates also moved higher. The average contract interest rate for 30-year fixed-rate mortgages (FRM) with balances at or below the conforming limit of $510,400 increased to 3.72 percent from 3.71 percent, while points were unchanged at 0.28. The effective rate was also unchanged.

The average rate for jumbo 30-year FRM, those with balances exceeding the conforming limit, increased to 3.75 percent from 3.70 percent. Points dipped to 0.17 from 0.19. and the effective rate increased.

The rate for 30-year FRM backed by the FHA increased to 3.84 percent from 3.80 percent. Points were unchanged at 0.26 and the effective rate moved higher.

Adjustable rate mortgage (ARM) rates moved lower. The average contract interest rate for 5/1 ARMs decreased to 3.21 percent from 3.23 percent, with points decreasing to 0.13 from 0.15 and the effective rate moved lower. The ARM share of activity increased to 6.2 percent of total applications from 5.9 percent a week earlier.