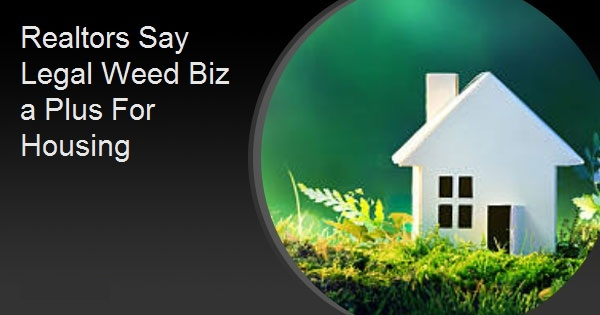 Realtors Say Legal Weed Biz a Plus For Housing

It seems as though legalized marijuana is said to be good for almost everything. Now a new study from the National Association of Realtors (NAR) has added real estate to the list. The impact is clearer when it comes to commercial properties, but agents saw differences in the residential sector as well where medical and/or recreational use of the substance has been legalized.

The NAR study, Marijuana and Real Estate: A Budding Issue (yes, NAR went there) grew out of a survey conducted with over 150,000 of its members, equally divided between those who operate in the commercial area (including building owners and managers) and those who practice residential real estate.

The study looked at states where marijuana has been legalized for medical purposes, for recreation, and for both, examining how it is grown, harvested, stored, sold, and consumed within those states. NAR found more impacts from legalization over time so divided some of the findings according to whether it occurred after or prior to 2016 which accounts for the dual percentages reported.

"As more states legalize marijuana, the real estate market will progressively have to adjust," said Dr. Jessica Lautz, vice president of demographics and behavioral insights for NAR. "From property owners, to manufacturers, to those who simply want to engage for leisure - it all touches real estate in some form."

In states were marijuana is legal in some form, between 9 percent and 23 percent of members who responded to the survey said they believe the inventory of available homes is tight for multiple reasons, including all-cash purchases from within the marijuana industry. While most respondents hadn't seen any changes in property values near dispensaries, between 7 percent and 12 percent said they had seen an increase in values while 8 percent to 27 percent said they had seen values decline.

"Residential practitioners are getting used to the new normal of having marijuana legally used within rental properties, while homeowner associations are tasked with setting new rules to address consumption and growth," said Lautz.

Three-quarters of members had never tried selling a grow house but among residential practitioners who had, 29 percent said they had a difficult time doing so. Twenty-seven percent of those in more recently legalized states reported difficulty compared to 25 percent in states that legalized before 2016.

Because Federal banking laws prohibit use of checks or credit cards to purchase marijuana, it is usually an all-cash business. About one-fifth to a quarter of landlords said they were unwilling to accept cash for rent in any instance, while about 10 percent said they would only refuse cash from an illegal federal activity. Forty-two percent of those in states where only medical marijuana is legal would accept cash rent, as would two-fifth of those where both medical and recreation use is allowed.

Among commercial practitioners, NAR found an increased demand for land, warehouses and store fronts that are intended for marijuana. In states where both uses are legal, more than a third of those polled said they saw an uptick in requests for warehouses or properties used for storage. In those same states, up to one-quarter of members said the demand for storefronts grew, while one-fifth said there was a greater demand for land.

"When the business of marijuana is discussed, some have a tendency to focus on only the buyers and sellers of the product," said Lautz. "However, these numbers show that marijuana has been a boon to commercial real estate."

Marijuana as a business has prospered for more than a decade and that growth continues to evolve. In the states where medical and recreational marijuana have been legalized for three years or more, each saw increases in the demands for commercial properties. As in residential uses, the effect on commercial property values near dispensaries was mixed, but about 20 percent reported an increase. There were fewer reports of declines.

Many respondents said leases had been modified to accommodate the marijuana industry, especially where legalization occurred prior to 2016. About half of respondents in medical marijuana states reported no issues leasing a property previously used to grow marijuana as did 35 to 49 percent of those where both uses were legalized. The most common problem among these properties were lingering odors, followed by moisture issues. Both matters were more common in areas where recreational marijuana has been legal for a longer period of time.