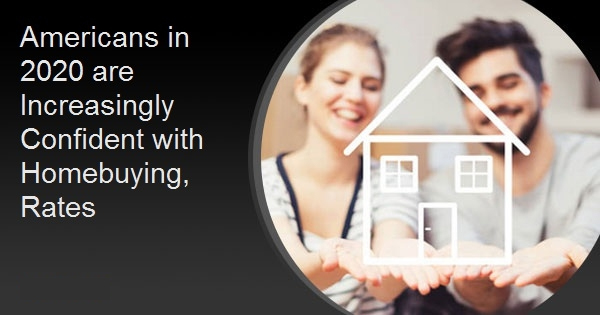 Americans in 2020 are Increasingly Confident with Homebuying, Rates

Fannie Mae's Home Purchase Sentiment Index (HPSI) is on a roll. The company's index, based on some of the results from Fannie Mae's National Housing Survey, increased for the third consecutive month in January and is 8.3 points higher than in January 2019.

The HPSI rose 1.3 points to 93.0. The survey high, set last year, was 93.8. Four of the six index components rose month-over-month. The two that lost ground were down both from December and from a year earlier.

The index's strongest component was the one measuring consumer opinion about the direction of interest rates. That component has been at a net negative reading for several years, indicating that most respondents expected rates to increase. While the net is still negative, 48 percent of respondents now expect rates to be stable over the next year. That has pushed the net to -26 percent, up 6 points from December and 27 points over the last year.

When asked about selling, those who said it is a good time increased this month 65 percent to 66 percent this month and the percentage who view it as a bad time decreased 1 point to 21 percent leaving a net positive of 45 percent, 2 points higher than in December and 10 points higher year-over-year.

More consumers now think that home price have stabilized. The share who expect little or no appreciation over the next 12 months rose to 38 percent from 35 percent, leaving a net share of 41 percent expecting further increases, 11 percent more than a year ago. Only 7 percent of respondents expect lower prices.

The two index components that fell in January were the percentage of respondents who said they are not concerned about losing their jobs and the share who say their household income is significantly higher than 12 months ago. Job loss concerns were expressed by 14 percent, up from 12 percent in December. This reduced the net of those not concerned 2 points to 72 percent. There was a 1-point decline in the net of those reporting significantly higher income to 16 percent, but the net was 27 percent a year earlier.

"The HPSI posted another strong reading to open the new year, helped in large part by the upward trend in the share of consumers saying they expect mortgage rates to remain steady," said Doug Duncan, Senior Vice President and Chief Economist. "Low rates continue to be a key driver of consumer optimism about both current homebuying and home-selling conditions. Favorable views on job security and personal financial expectations reflect the strength of the labor market, which we believe will continue to bolster housing demand."

The NHS, from which the HPSI is constructed, is conducted monthly by telephone among 1,000 consumers, both homeowners and renters. In addition to the six questions that are the framework of the index, respondents are asked questions about the economy, personal finances, attitudes about getting a mortgage, and questions to track attitudinal shifts. The January 2020 National Housing Survey was conducted between January 2 and January 23.