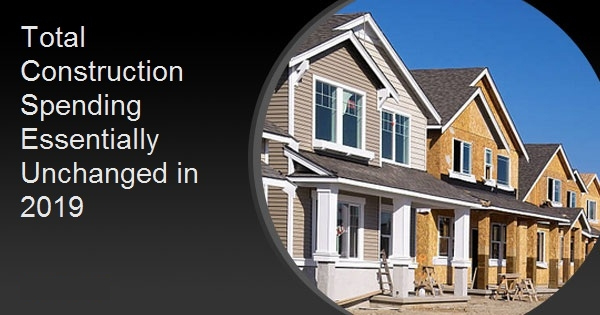 Total construction spending ended 2019 down slightly from the prior year. The U.S. Census Bureau said the total value of construction, both public and private, put in place during the year was $1.304 trillion compared to $1.307 trillion in 2018, an 0.3 percent decrease.

Residential spending was down 4.6 percent from the prior year with expenditures of $520.9 billion. Non-residential spending gained 2.8 percent but annual gains in the various non-residential categories were modest. Only one type of construction rose by double digits; water supply projects were up 12.6 percent. This is a small dollar category however; total expenditures for the year were only $9.30 billion. The big losers were spending on commercial projects (down 11.3 percent) and construction related to religion (down 10.6 percent.)

Overall spending for the month of December was at a rate of $1.328 trillion, down 0.2 percent from November but 5.0 above the rate the previous December.

Spending in the private sector also declined from the previous year, from just over $1 trillion to $975.0 billion. Non-residential spending was flat at just over $450 billion in both 2018 and 2019. Of the 11 categories of construction, six posted annual losses, three of them in double digits.

Still, residential spending did end the year on a strong note, rising 1.4 percent in December to a rate of $540.7 billion which was 5.5 percent above the rate the prior December. Single-family spending rose 2.7 percent for the month and was 5.2 percent higher than a year earlier at $289.3 billion. Multifamily construction pending was off during the last month of the year, declining 1.8 percent and 7.1 percent from the two earlier periods.

The value of publicly funded construction put in place rose 7.1 percent year-over-year to $328.8 billion and the non-residential portion was up 7.2 percent. The latter was driven by big increases in commercial, power related, and conservation projects. Residential spending for the year gained 0.2 percent. A total of $6.545 was spent in that sector.