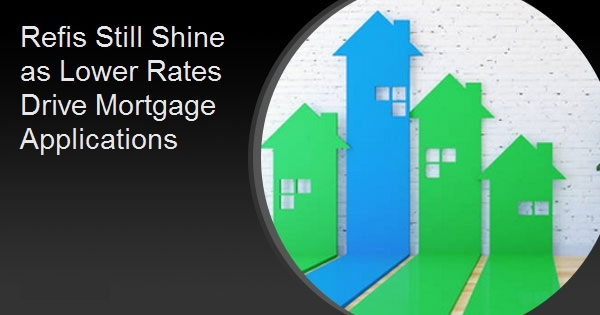 Refinancing continues to dominate mortgage activity, spurred by another dip in mortgage rates. The Mortgage Banker Association (MBA) said the volume of loan applications rose during the week ended January 24 even though some businesses were impacted by the Martin Luther King holiday.

MBA's Market Composite Index, a measure of mortgage loan application volume, increased 7.2 percent on a seasonally adjusted basis from the week ended January 17. The index was adjusted to account for the week's holiday. The index was 1.0 percent lower before adjustment.

The seasonally adjusted Purchase Index increased by 5.0 percent from one week earlier and was up 2,0 percent before adjustment. The index was 17 percent higher than the same week one year ago.

"Mortgage applications continued their strong start to the year, as borrowers acted on the drop in mortgage rates last week. Rates were driven lower by investors' increased concern about the economic impact from China's coronavirus outbreak, in addition to existing concerns over trade and other geopolitical risks," said Joel Kan, MBA's Associate Vice President of Economic and Industry Forecasting. "With the 30-year fixed rate at its lowest level since November 2016, refinances jumped 7.5 percent. Purchase applications grew 2 percent and were more than 16 percent higher than the same week last year. Thanks to low rates and the healthy job market, purchase activity continues to run stronger than in 2019."

The rate for jumbo 30-year FRM, loans with balances higher than the conforming limit, dropped 9 basis points to 3.78 percent. Points dipped to 0.20 from 0.21 and the effective rate moved lower.

The rate for 15-year FRM moved 1 basis point lower to 3.24 percent while points remained at 0.22. The effective rate was unchanged.

The average contract interest rate for 5/1 adjustable rate mortgages (ARMs) declined to 3.15 percent from 3.29 percent and points dropped from 0.25 to 0.12, pulling the effective rate lower. The ARM share of activity increased to 4.7 percent of total applications from 4.6 percent a week earlier.