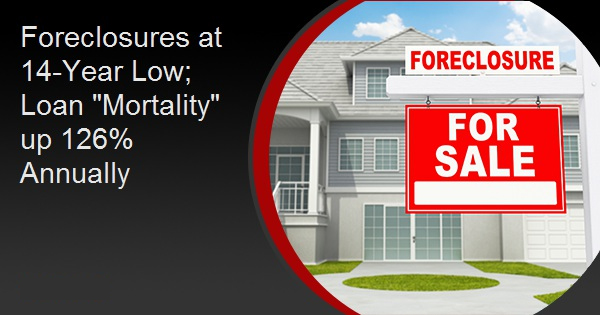 Even though many of the measures are already at record lows, mortgage delinquencies continue to tick downward according to Black Knight's "first look" at December loan performance data. At the same time, the Single Month Mortality (SMM) rate, an indicator of mortgage loan prepayments, continues to increase, but at a slower rate.

Mortgage delinquencies fell by 3.75 percent from November to December and were down 12.43 percent compared to December 2018. At the end of the month there were 1.80 million loans that were 30 days or more past due, although not in foreclosure, 3.40 percent of all mortgaged homes. That delinquency rate is 0.04 percent away from the record low set in May 2019.

Serious delinquencies declined by 12,000 month over month and 84,000 on an annual basis. At the end of December there were 427,000 loans that were 90 or more days past due but not in foreclosure.

Foreclosure starts did increase during the month, jumping by 18 percent to 39,500. This is still 14.70 percent fewer such legal actions than in December 2018.

The foreclosure inventory, loans in the process of foreclosure, stands at 427,000. This is 3,000 fewer than in November and an annual decline of 26,000 loans.

The national foreclosure rate fell again in December to reach a new 14-year low of 1.48 percent (foreclosure sales as a percent of serious delinquencies.) This is the lowest rate on record except for the final five months of 2005.

After falling by 19 percent in November, prepayment rates ticked upward in December, rising 1.43 percent to a SMM rate (single month mortality rate... basically a measure of how quickly loans are being paid off due to refinancing or selling to purchase a new home) of 1.48 percent. This is 126 percent higher than the SSM a year earlier.

Black Knight will publish a more comprehensive look at its December mortgage performance data in the next edition of its Mortgage Monitor. It will be published on Monday, February 3.