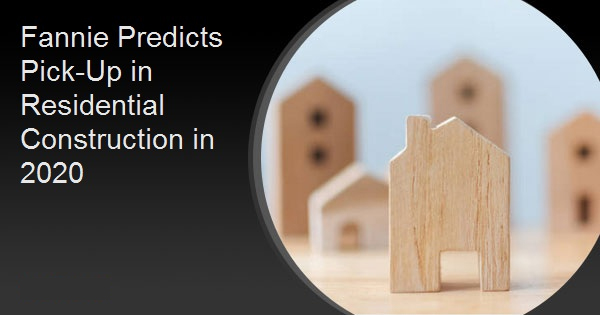 In its first economic forecast of 2020, Fannie Mae's Economic and Strategic Research (ESR) Group is doubling down on its late 2019 predictions. The economists say that "

construction is poised to become a significant contributor to overall economic growth again," and sets the year's theme as "A Resilient Economy Overcomes Risks to Drive Housing."

For the economy as a whole, the ESR says it expects its earlier forecast that fixed business investment would turn positive at the end of last year to finally come about in the current quarter. It also ups its previous 2.3 percent growth in 2019 real gross domestic product (GDP) to 2.4 percent. Its full year 2020 forecast is unchanged at 2.1 percent although stronger growth is now expected at the start of the year.

Since the December report three additional downsize risks have emerged; the geopolitical situation in the Middle East after the strike against an Iranian general, intensified concerns over the downside effect of the Boeing 737 grounding due to the release of unflattering internal emails about the plane, and growing concern about the weak manufacturing sector. To the upside, are the reversal of the 2019 global slowdown and strong disposable personal income growth and elevated savings rates that suggest consumers may have more spending power than expected.

Fannie Mae continues to believe that Federal Open Market Committee will hold the target federal funds rate at its current level through the end of this year. They expect that Treasury yields will remain stable throughout their forecast horizon, with the 10-year Treasury yield remaining in the 1.9 percent range through late 2020, and mortgage rates to remain within a similarly tight range of approximately 3.7 percent through 2021.

The ESR Group says the housing-related data released since its last report was largely consistent with its forecasts but significant revisions to housing starts reported for September and October will likely pull single-family housing starts down from earlier estimates despite growth of 2.4 percent in November. They now expect fourth quarter residential fixed investment (RFI) growth to be 4.0 percent annualized compared to their prior forecast of 4.5 percent.

Single-family building permits rose for the seventh straight month in November, reaching a post-recession high. However, permits have outpaced their usual relationship to starts over the past three months and sales of homes have remained at a typical share suggesting a growing backlog in new home starts. The National Association of Home Builders' (NAHB's) Housing Market Index set a new post-recession peak of 76 in December. These factors indicate that housing starts will accelerate in coming months and Fannie Mae is now forecasting single-family housing starts will be up 1.1 percent in 2019, down from their previous forecast of 1.4 percent, but will grow by 10 percent rather than 9.8 percent this year.

Sales of new homes will not grow as strongly this year as last when homebuilders were drawing down inventories previously started but unsold homes. With those inventories largely depleted, sales growth will be constrained until there is the expected acceleration in housing starts. The economists have made a modest 9,000-unit downward revision in new home sales for fourth quarter 2019 and revised upward sales in the first and second quarters of 2020 by an aggregate of 8,000. Housing demand will continue, driven by low rates and continued strong labor numbers, but the build-up of existing homes for sale that started in 2018 is now completely exhausted. The number of homes on the market was down 5.7 percent in November from the prior year and sat at the lowest level for that month since the data series began in 1999. Relative to the current pace of sales, the supply of homes for sale fell to 3.7 months. This tightness is limiting potential growth in sales of existing homes despite the solid demand factors supporting the housing market.

As expected, existing home sales declined in November, down 1.7 percent to an annualized pace of 5.35 million units and the first estimate of October sales was revised down substantially. The Pending Home Sales Index rose to the second highest level in nearly two years in November which suggests a possible existing sales rebound in December but probably not large enough to offset the October revision. Consequently, Fannie Mae has made modest revisions to existing home sales for Q4 2019 and Q1 2020 and equally modest increases in their forecasts for the remainder of 2020 and all of 2021.

Interest rate stability indicates that the large refinancing volumes seen last year are probably coming to an end and, where such stability would usually support homebuying, purchase originations have been trending sideways. This is consistent with the sluggish pace of existing home sales due to limited inventory.

Strong demand, low rates, tight inventories, and the solid job market will mean higher rates of appreciation than were anticipated. Fannie Mae has revised its forecast of home price growth this year from 4.1 percent to 4.6 percent and in 2021 from 2.0 percent to 2.1 percent. This stronger price appreciation means higher purchase mortgage volumes that previously expected going forward and slightly lower volumes last year, changes that were mostly lost in rounding. Purchase mortgage originations for 2019, 2020, and 2021 are expected to be $1.27 trillion, $1.37 trillion, and $1.43 trillion, respectively.