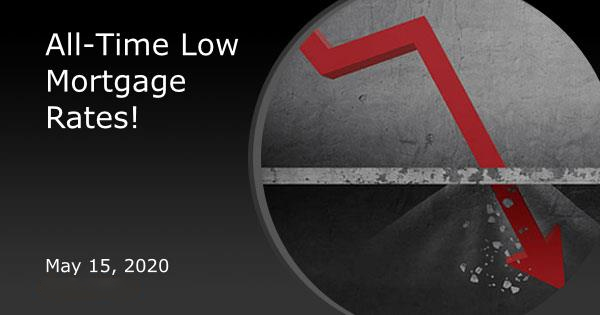 Before coronavirus, the average 30yr fixed mortgage rate was almost always 1.6% to 2.0% higher than 10yr Treasury yields.  When bond volatility was extreme (especially when Treasury yields were dropping quickly), that gap could be wider, but it was never even close to current levels.  Why might this be?

When an investor buys a US Treasury Note, there's effectively no risk that the government will fail to send a payment on time.  Believe it or not, this is largely the case with most of the mortgage market as well--or at least it was the case before coronavirus.

Mortgage investors have a safety net that guarantees timely payment even if homeowners aren't making payments.  The problem with coronavirus is that the amount of non-paying homeowners is higher than ever thought possible.  It led mortgage investors to question the strength of existing safety nets.

Even though investors have no doubt they'll get paid eventually, there has been plenty of uncertainty surrounding the timeliness of the payments as well as other costs that might arise in this unprecedented environment.

That can be seen in the following chart of average 30yr fixed rates versus the 10yr Treasury yield.  The orange line is simply the difference between the two.  The higher it is, the higher mortgage rates are relative to Treasury yields.  As the pace of new forbearances subsides, they've been closing the gap surprisingly well. 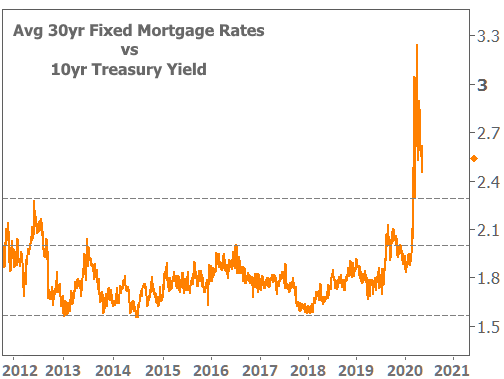 This wouldn't mean too much for the mortgage market if Treasuries happened to be following stock prices higher.  Thankfully they're not. 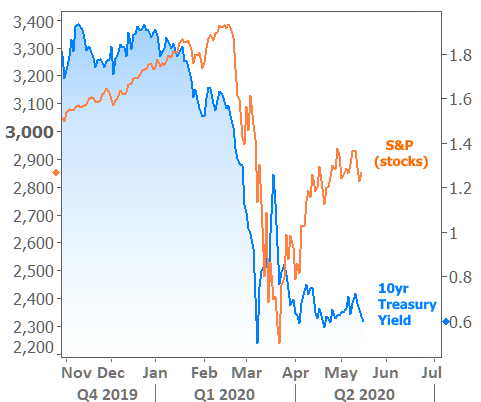 Actually, the notion of being thankful for the current stance in Treasuries is a double-edged sword because it amounts to being thankful for bad news.  If there's a reason that Treasury yields have been able to remain so resiliently low, it's the incredibly downbeat economic outlook.  The latest evidence came in the form of Friday morning's Retail Sales report, which was easily the weakest on record. 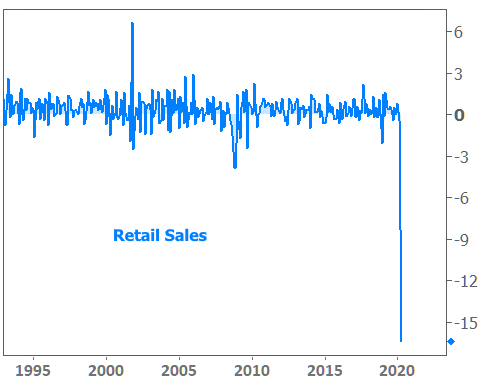 Let's put these pieces together. We have super low, relatively flat Treasury yields.  We also have mortgage rates that are finally starting to close their historical gap with Treasury yields.  Together, this adds up to a nice drop in mortgage rates.  As of Friday, the average conforming conventional 30yr fixed rate set a new all-time low. 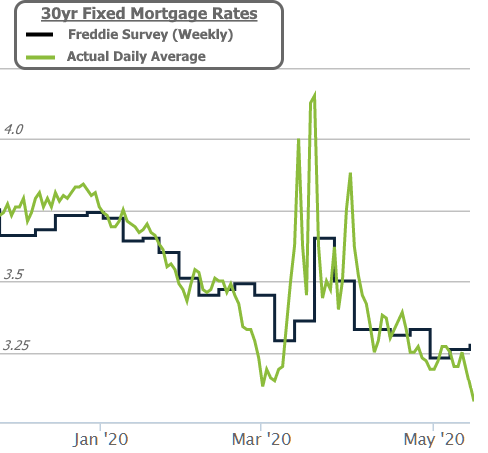 This victory is tempered, for some, by the current reality of cautious mortgage investors.  While they've begun to warm up to the most ideal loan scenarios, anything "off-the-beaten-path" isn't nearly as close to historical lows.  This group includes risk factors like cash-out refinances, lower FICO scores, investment properties, and higher loan-to-value ratios. Combine more than a few of those factors and many lenders won't even do the loan, let alone offer a decent rate.  This will change eventually, but it will take clarity on the reopening of the economy and plenty of time.