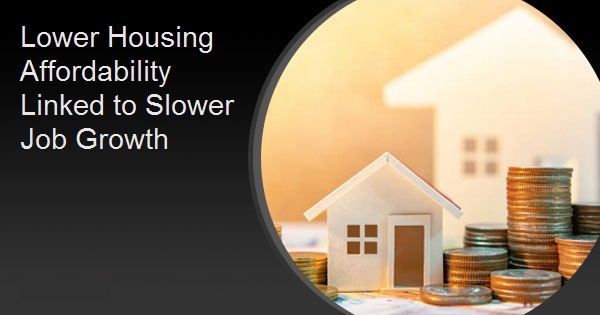 The National Association of Realtors® (NAR) has uncovered another downside to the increasing lack of housing affordability in the U.S. A new study found that, in many areas where affordability has declined over the last five years, so has the rate of job growth.

NAR measures affordability by calculating the ratio of the median family income to the metro area's qualifying income for a home mortgage or QI. QI is the income needed so that the 30-year fixed mortgage payment on a median-priced single-family home purchased with a 20% down payment accounts for no more than 25% of income.

NAR looked at the top 174 metro areas and ranked them by this measure of affordability. It them analyzed the shift in each area's affordability ranking and the pace of non-farm payroll job growth (generally known as job creation) in the third quarter of 2019 compared to the average job growth from 2014 to 2018.

NAR found that affordability rankings worsened in 81 metro areas. In 34 of them job growth fell faster in Q3 of 2019 than did the national rate over the previous five years.

Those 81 metro areas need more housing inventory to boost affordability, according to Lawrence Yun, NAR chief economist. "Job growth has slowed in these areas in part because limited supply is making homes less affordable," he said. "As inventory continues to decline and affordability worsens, workers, businesses and companies are less incentivized to do business in these areas."

For example, Boise experienced the largest drop in affordability, from 108th in 2014 to 153rd as the price of a single-family home in that metro grew by 75 percent. This was four times the 18 percent increase in the median family income. During this period, employment growth slowed from an average of 3.9 percent in the previous four years to 3.2 percent in the study quarter.

Tampa showed a similar pattern, with its affordability ranking dropping from 98th in 2014 to 133rd as home prices rose 58 percent, three times the increase in income. As affordability declined, Tampa's job growth slowed by 0.8 percentage points (2.8% vs. 2.0%).