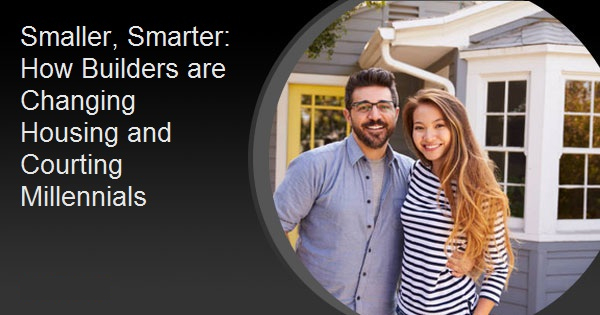 Smaller, Smarter: How Builders are Changing Housing and Courting Millennials

After the housing crash and as the recovery began home builders ratcheted up the size of the homes they were building because the profit margin was higher on larger homes. There was also a lot of competition at lower price points from the numbers of distressed properties for sale. Now they are not only rethinking that strategy but apparently acting to reverse it.

Paul Davidson, writing in USA Today, says it is getting easier to find smaller and more affordable newly constructed homes. One builder, Alure Homes, told Davidson that homes priced under $300,000 made up about 50 percent of the company's production last year, up from 20 to 30 percent in the previous six years.

Builders have been trying to lower the costs of construction but have been fighting a lot of headwinds. The National Association of Home Builders (NAHB) has been citing the lack of skilled labor which causes delays and drives wages higher, the high cost of building lots, especially close to employment hubs, material costs which were heightened by the Trump tariffs, and regulatory compliance as contributing to those costs.

The entry level buyers weren't terribly plentiful either. The Millennials were hard hit by the recession which made them late in launching their careers and delayed their household formation and ultimately their homebuying. Tightened lending standards also made it more difficult for first-time buyers to get into the market. But now with many Millennials earning substantial incomes, married, and well into their homebuying years, (they accounted for the largest share of home sales in 2018, 37 percent, according to the National Association of Realtors) builders are trying to find a way to capture them as buyers. The surest way to do that is to build more affordable homes.

Davidson says builders are figuring ways to squeeze out an industry average 20 percent profit margin on starter homes despite the higher costs. Their chief strategy: provide just a handful of choices for floor plans and features such as cabinets, countertops, and carpeting. That allows them to order materials in bulk so they can get discounts and minimize changes that delay construction and add costs.

The Census Bureau's new home sales report for November shows that new homes priced between $200,000 and $299,000 comprised about 34 percent of year-to-date sales and the median price of a new home in the third quarter was $311,000 according to NAHB.

Davidson points out that prices keep climbing and vary widely by market, so the size of homes is more telling. The Census Bureau says from 2015 to 2018 the share of new homes under 2,400 square feet increased 4 points to 51 percent.

Davidson ticked off a list of builders who are building smaller and says D.R. Horton led the effort with its Express Homes division six years ago. The brand offers fewer floor plans and few options. It also has lower material costs because it is such a large buyer. Sixty-eight percent of the homes it sold in its FY2019 were priced under $300,000.

Pulte has lowered costs by offering fewer floor plans and building further out into the suburbs where land is less expensive. Lennar said it produced 16 percent more homes in the fourth quarter of 2019 than a year earlier, but its average sales prices fell 7 percent. Entry-level homes now make up 40 percent of its business.

That these less pricey homes are still in short supply means their average price has been claiming, but so has the price of entry-level existing homes which have been appreciating at nearly twice the rate of more expensive properties. Then too, entry level can be in the eye of the company. Toll Brothers, which has an average sale price of nearly $900,000 is also getting into the starter home market - but theirs are priced between $300,000 and $500,000.