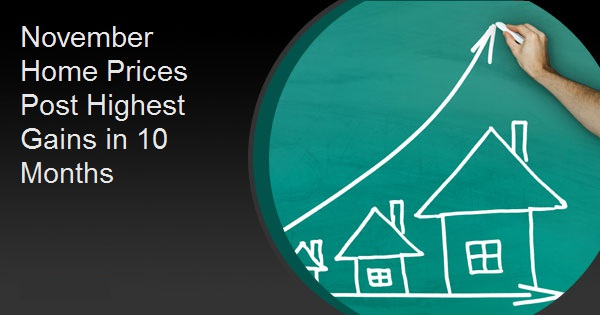 The pace of home price increases picked up in November, increasing by 3.7 percent on a year-over-year basis, up from 3.5 percent in October. CoreLogic said its Home Price Index (HPI) posted a monthly gain of 0.5 percent, a substantial uptick from the 0.2 percent gain the prior month. The index, which covers both market and distressed sales, hit a recent peak of 6.62 percent in April 2018 before beginning a steady slowdown.

CoreLogic's chief economist Frank Nothaft said, "The latest U.S. index shows that the slowdown in home prices we saw in early 2019 ended by late summer. Growth in the U.S. index quickened in November and posted the largest 12-month gain since February. The decline in mortgage rates, down more than one percentage point for fixed-rate loans from November 2018, has supported a rise in sales activity and home prices.

"Prices rose on an annual basis in every state but Connecticut. The top two states for annual home price increases were unchanged from October; Idaho, up 10.2 percent and Maine with an 8.6 percent increase. West Virginia was third at 6.9 percent, replacing Indiana in the lineup. Washington D.C. was the fastest appreciating metro with 3.9 percent annual price growth.

During the second quarter of 2019, CoreLogic, together with RTi Research of Norwalk, Connecticut, conducted an extensive survey measuring consumer-housing sentiment among millennials. The study showed that a significant number of older millennials (ages 30-38) are strongly considering moving within the next 12 months, with 64 percent of this cohort expecting to purchase a home, reinforcing this group's interest in the housing market. Meanwhile, 57 percent of younger millennials (ages 21-29) plan on renting their next home. Despite the purchase intent among older millennials, 43 percent still view homeownership as unaffordable and out of reach.

"We're continuing to see a split among older and younger millennials when it comes to their plans to purchase a home" CoreLogic CEO and President Frank Martell commented. "While older millennials are looking forward to participating in the housing market in the future, their younger counterparts don't see themselves buying a home anytime soon. With home prices expected to rise just over 5 percent over the next 12 months, affordability remains a concern for most prospective buyers."