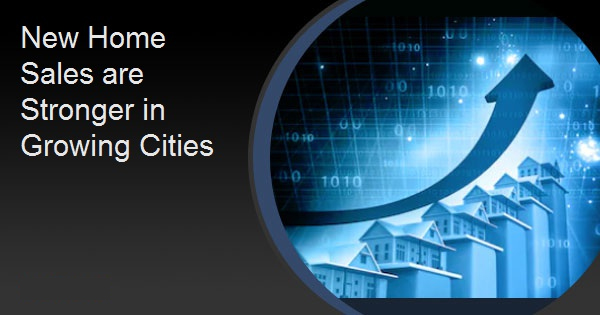 Depending on how you look at it, either Texas and Florida or Nevada and Idaho were the fastest growing states in 2019. Frank Nothaft, CoreLogic's chief economist says that in terms of sheer numbers the first two grew dramatically, with Texas adding 367,000 more residents and Florida's population increasing by 233,000. Percentage wise, the two smaller states each grew by more than 1.7 percent.

In terms of new home sales, it is clearly the big numbers that count and the two states that have seen the largest population gains have also seen the most robust sales. The two metro areas with the largest number of new home sales were Dallas and Houston and Texas and Florida together claimed six of the top ten spots. Growth in new home sales was not limited to big population centers, however. Nothaft says that those metropolitan areas where new home sales grew by the largest percentage shared common characteristics; most are mid-sized, homes are affordable, employment is high, and the climate, with limited exceptions, tends to be warm. This combination again points to strength in the South and the West. Among metros with more than a 15% annual increase in sales, more than one-half were located in Texas and Florida.  These places had lower housing costs than in high-cost markets and had a collective unemployment rate that was two-tenths of a percentage point lower than the U.S. rate (3.4 percent according to the Bureau of Labor Statistics.)  Many were also located in the sunbelt, and attractive to retirees looking for a lower-cost place to live.

Nothaft noted that, while most of these new homes were financed through a conventional conforming loan (only a third were not) there was significant variation by home price. Among those who bought homes priced below $250,000 half went the conventional route and half opted for a loan through a government program. For those purchasing in the $1 million and above range, nearly all mortgages were conventional and, not surprisingly, 80 percent were jumbo loans. Nothaft says that family incomes are expected to rise and mortgage rates to remain low through this year and household growth and the need for additional home construction will continue. He expects that metro areas in the South and West will likely continue to be the leaders in new home sales.