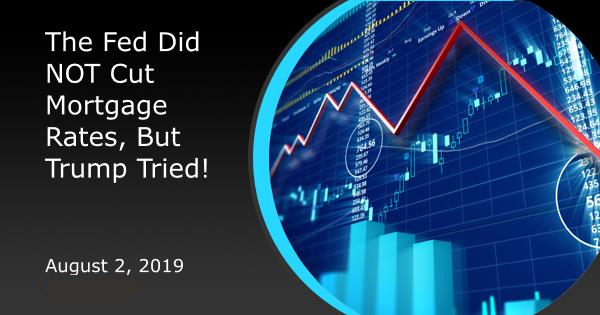 The Fed Did NOT Cut Mortgage Rates, But Trump Tried!

On the morning after this week's Fed rate cut, mortgage rates were roughly unchanged versus the previous morning.  This will come as a surprise to scores of consumers who mistakenly believe the Fed's 0.25% rate cut equates to a 0.25% drop in ALL rates.

The Fed only sets its own "Fed Funds Rate" which governs overnight lending between big banks.  The only direct effect on the mortgage market would be a 0.25% drop in many Home Equity Lines of Credit (HELOCs), which are based on the Fed's rate.  The vast majority of mortgages, however, are determined by other parts of the financial market.

In fact, mortgages actually "turn into" securities that are traded in financial markets as a part of the process that makes them safer and easier for investors to buy (securitization). Those securities trade just like other securities, for the most part (e.g. stocks, bonds, etc.), and it's the price movement of those securities that most directly dictates mortgage rates.  Shockingly enough, these are known as Mortgage-Backed Securities (MBS).

Unlike the Fed Funds Rate, which can only change once every 6 weeks, longer-term rate-bearing securities (like MBS and US Treasuries) can change every minute of every business day.  They've been doing just that for months as market anticipation for the Fed rate cut has increased.  Simply put, the Fed rate cut has long since had its impact on mortgage rates.  After all, if a security can move in real time, and if the market was 100% sure the Fed was going to cut at least 0.25%, traders would have been foolish NOT to get in position.

This isn't a unique occurrence.  Rates ALWAYS get in position for Fed rate cuts/hikes like this week's because the Fed is sure to telegraph its intention when it's making the first big change in a long time (this was the first rate cut since 2008!).  In late 2015, when the Fed hiked rates for the first time since 2006, it was the same story, but in the opposite direction. 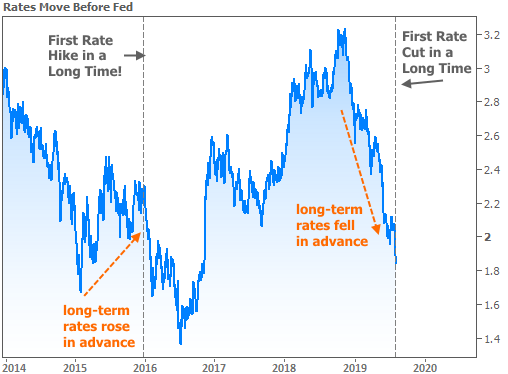 To emphasize the point in even simpler terms, consider that stocks LOST ground after the Fed announcement, even though Fed rate cuts are considered to be a good thing for stocks. Like mortgage rates, stocks already had plenty of time to PRICE-IN the Fed's move.  That left Wednesday for them to react to other information from the Fed.  Specifically, they were a bit disappointed that Powell didn't do more to offer assurances about additional cuts.  That's why we saw the lion's share of market movement after Powell's press conference at 2:30pm ET as opposed to the rate announcement at  2pm ET. 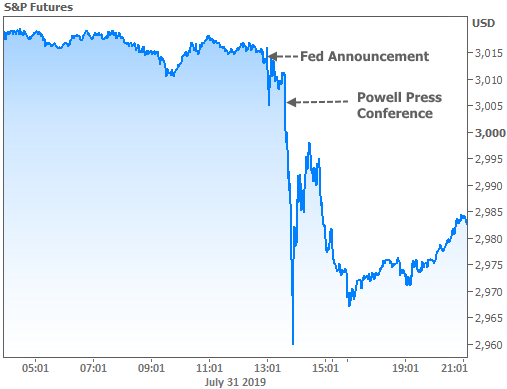 That means, all other things being equal, if the Fed were to say "we're done cutting for now and will keep rates at these levels for the next 6 months," you'd see an immediate and rather large move higher in rates.  In other words, markets were already counting on another 1-2 Fed rate cuts simply to sustain the low rates that are already here.  By the end of the week, however, speculators were betting on another 2-3 cuts!  What's up with that?

As we've seen on numerous occasions in 2019, when Trump unexpectedly announces new tariffs on China (or Mexico) via Twitter, markets react in a major way.  Timing was a factor this week as the tweets followed a Manufacturing report that was gloomy enough without another batch of tariffs to worry about.  Trading positions are also more susceptible to surprises on the day after a Fed day.  Regardless, every escalation of trade war rhetoric increases the odds that the Fed will need to cut rates deeper to promote continued economic expansion. 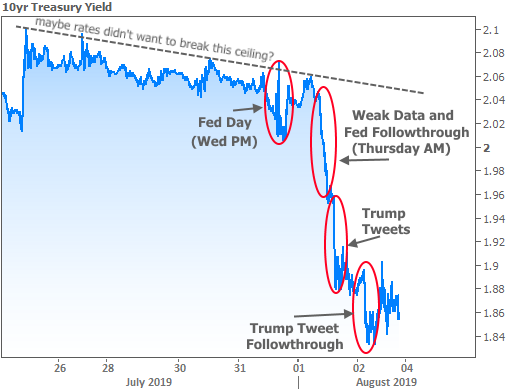 If that looks like a fairly significant drop in rates, it is!  The following chart does a better job conveying the size.  Each "candlestick" represents a week of trading in 10yr Treasury yields (the benchmark for longer-term rates, such as mortgages).  Orange candlesticks mean rates moved higher; blue = lower.  For the record, you'd have to go back to 2012 to see a week where rates fell farther! 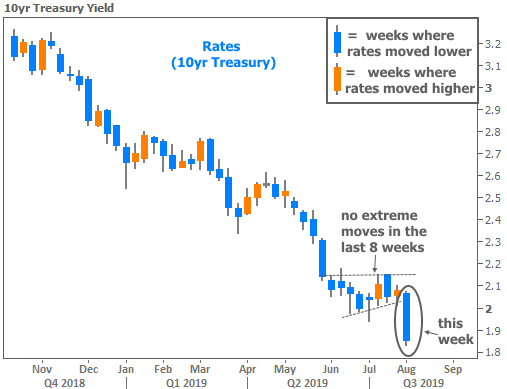 Low rates don't singlehandedly prop up the housing market, but they definitely help.  That was part of the rationale in last week's newsletter which pushed back on recent news headlines calling the health of the housing market into question (revisit it HERE if you like).  Now this week, we have the most recent Pending Home Sales report, which is an advance indicator of Existing Home Sales--by far the biggest component of the housing market.  I'll let the chart do most of the talking.  Let's just say, if you're a regular reader of my newsletters, this is exactly how this summer was supposed to go. 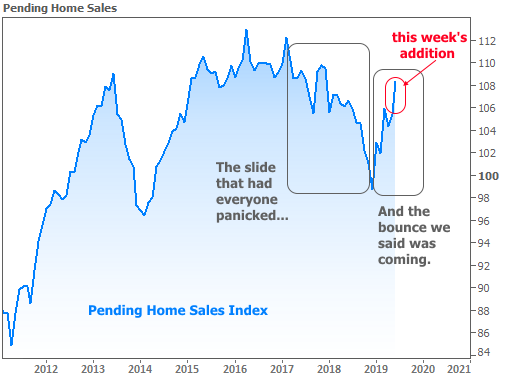