You've heard of time healing all wounds, but what about low rates healing the mortgage and housing markets? It's not that either was particularly distressed, but both have benefited in a major way from the recent drop in rates. Just as important as the drop itself has been rates' ability to HOLD at or near long-term lows for 2 full weeks now.

It's not at all uncommon for rates to make big moves from time to time.  When that happens, it's far more common to see the most extreme rates (either highs or lows) persist for a few hours to a few days.  This is easy to see in the bar chart of 10yr Treasury yields below.  Notice the previous surges toward lower rates in 2019 were quickly turned away while the most recent surge has had some serious staying power. 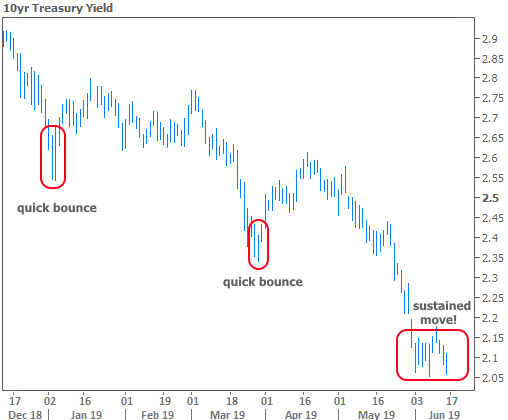 The reason this is such a profound benefit for the mortgage market is that it allows a far greater portion of eligible homeowners to hear about the move in rates while they still have time to take advantage of it.  This was the reason that I predicted a massive surge in refinance demand in last week's Newsletter with the following chart: 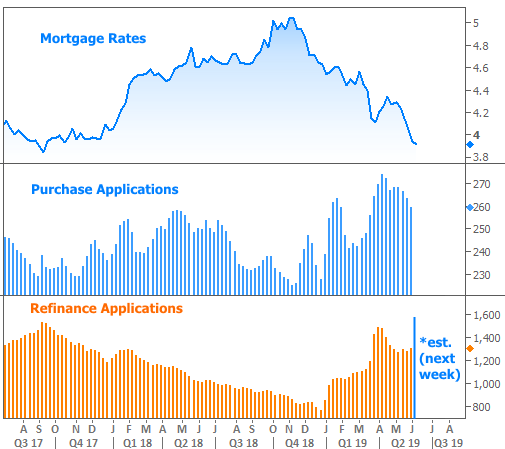 And here's the most up-to-date version of the same chart after this week's application data came in: 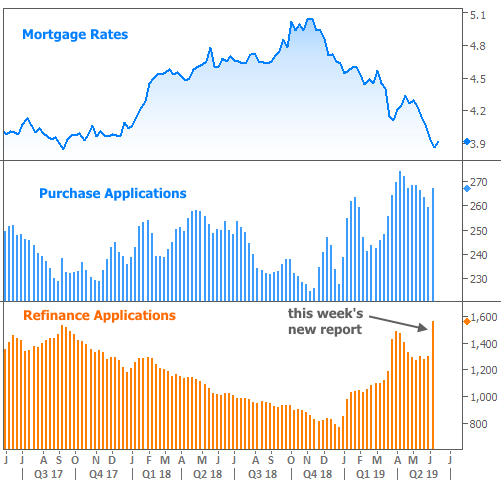 In other words, persistent availability of the lowest rates since September 2017 had a perfectly logical impact!  In addition to the surging refi demand, low rates are also boosting purchase activity and leading to improvements in lender sentiment.

Can the good times keep rolling?  This is a great question--especially considering the longevity of the rate rally to date.  It's impossible to answer, unfortunately, without knowing how key events will unfold.  These include various economic reports, Fed policy changes, and any political developments that fall under the "trade war" category.

What we do know is that we'll receive important updates on all fronts in the coming weeks.  These include a new policy announcement from the Fed next Wednesday, the G-20 summit at the end of the month, and an extremely important slate of economic data in the first week of July.  In general, the worse things look for the economy, the better the odds are for rates to continue lower.  An accommodative response from the Fed (i.e. if they offer hints about rate cuts) would solidify and accelerate such a move.

While the Fed Funds Rate doesn't directly affect conventional mortgage rates, the market's expectation for Fed rate hikes/cuts is a different story.  As speculators have gradually increased their calls for 3 rate cuts by the end of 2019, longer-term rates (represented below by 10yr Treasury yields) have followed a substantially similar path. 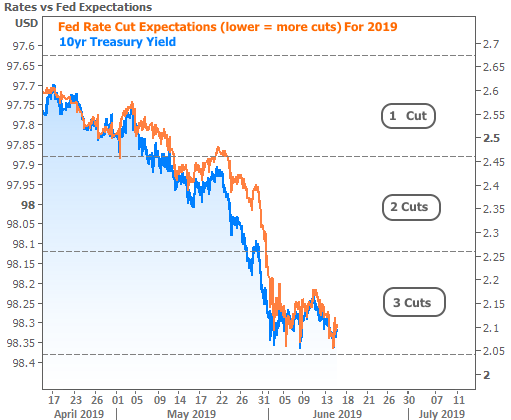 This makes next week's Fed announcement (and press conference) all the more important.  Keep in mind that the market's expectation is already reflected in today's interest rates.  Investors are expecting the Fed to do/say something to acknowledge weaker economic data and increased global growth headwinds.  To whatever extent the Fed isn't "concerned enough" in the eyes of traders, rates could move back up just as easily as they could continue to fall.