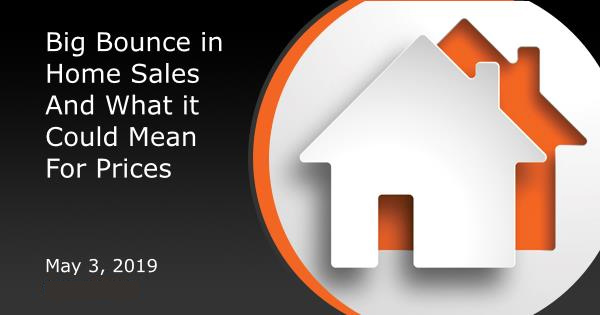 It was an action-packed week for financial markets. Earnings were in full swing. There was a ton of economic data to digest. And of course, there was the Fed announcement and press conference to cause volatility from Wednesday afternoon on. But one of the most interesting developments was the big bounce in Pending Home Sales on Tuesday.

Pending Sales are an advance indicator of actual home sales because they track home purchase contract activity.  As such, they often lead Existing Home Sales numbers by several weeks.  Both pending and existing home sales also tend to lead home price appreciation, which has been cooling significantly in recent months.

In other words, if we're seeing a big bounce in Pending Sales, we're likely to see a continuation of the bounce in Existing Home Sales, and in turn, at least some stability in home price appreciation.

Of course, one of those "all things being equal" caveats applies, but generally speaking, if consumers are in a position to buy more and more homes, the conditions that support stable-to-stronger home prices are typically in place as well.

The only catch is that it can take quite a while for the stability in price appreciation to show up.  This can be seen in the chart below where the most noticeable bounces in home sales tend to occur 8-10 months before we see a response in price trends (keep in mind, the blue line tracks home price CHANGE and not home prices themselves--i.e. as long as the line is above zero, prices are moving up). 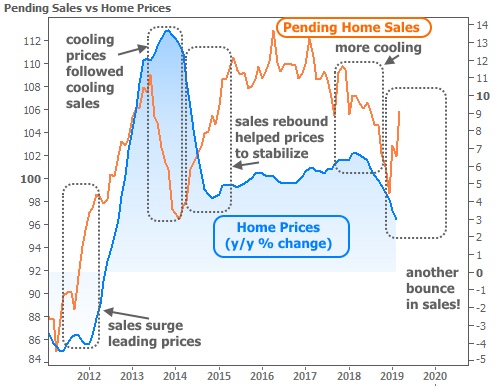 By Wednesday, the big week of economic data and events was in full swing.  A weak manufacturing report pushed rates lower in the morning and markets reacted favorably to the Fed announcement at 2pm.  In this context, "favorably" means that the prices of both stocks and bonds increased (and when bond prices increase, yields/rates move lower). 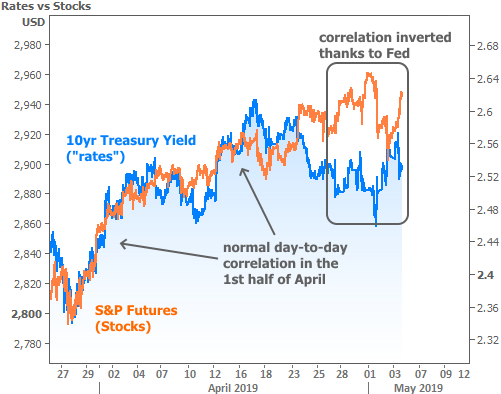 While the Fed announcement itself was helpful for both stocks and bonds, 30 minutes later, Fed Chair Powell delivered prepared remarks that sent markets scrambling in the other direction.  The offending comments included

All of the above was enough for an immediate spike in bond yields and a quick reversal for the stock market as seen in the following chart. 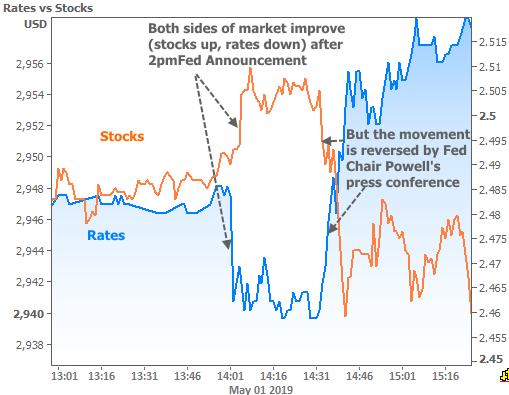 This momentum carried through to the next trading day and it wasn't ultimately reversed for the bond market until the reaction to Friday morning's economic data. 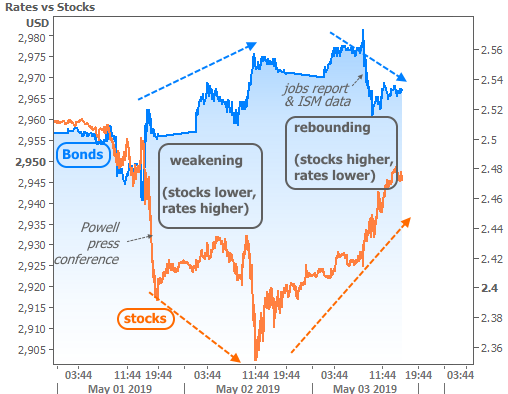 If you pay exceptionally close attention to economic data you may be wondering how the apparently strong jobs report could possibly result in rates moving lower.  After all, strong jobs numbers are usually bad for bonds/rates.

In this case, strong jobs growth is old news and traders are at least as interested in other parts of the report.  Specifically, the wage growth component matters as much as anything these days due to its implications for inflation (which in turn matters because low inflation means the Fed can continue to be friendly).  While the job tally was stronger-than-expected, wages and weekly hours were lower than expected.  The implication is bad for inflation, which is already struggling, depending on the metric.

If we use inflation data that came out this week (Core PCE), we can see that it was already beginning to slide to 1.6% even though wages improved in 2018.  If Friday's wage data speaks to a peak/plateau in wage growth, it doesn't bode well for inflation.  The takeaway is that the Fed won't need to hike rates any time soon.  Indeed, speculators see a greater chance of a Fed rate CUT being the next move in December or January. 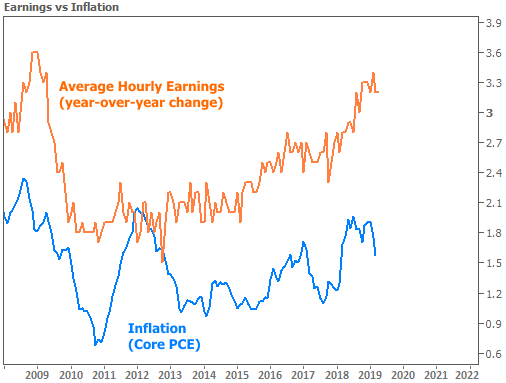 All of the above having been said, Friday's movement in Fed rate hike expectations was a drop in the bucket relative to the opposite movement of the previous 2 days.  In the following chart, the orange line moves lower as markets perceive a greater chance of a Fed rate CUT. 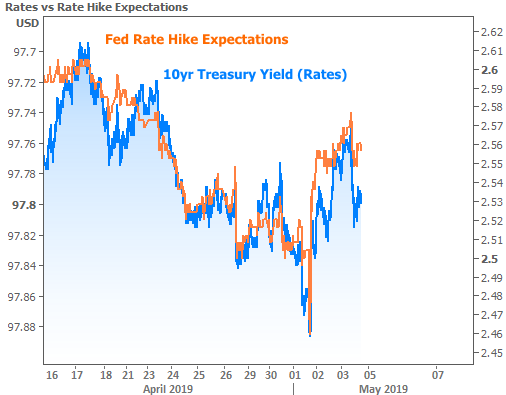 With the last chart in mind, 10yr Treasury yields tried and failed to break below 2.50%.  True, it did happen during the day on May 1st, but we wouldn't consider 2.50% to be 'broken' unless yields held under 2.50% through the close of business (and ideally for an additional business day).  The implication is that rates remain susceptible to volatility in the coming weeks.  Given all of the inflation implications underlying this week's volatility, next week's inflation data on Thursday and Friday could be more important than normal.