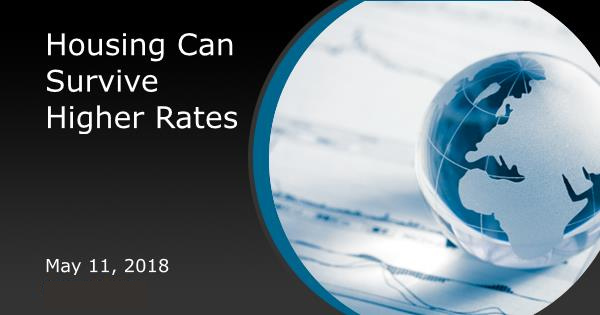 The US withdrawal from the Iran nuclear deal dominated the news this week. This will arguably impact rates, albeit in a subtle, roundabout way. The housing market won't care much, but it's not without its own challenges.

It takes a bit of work to connect recent interest rate moves to the Iran news.  In fact, there's really not much of a connection--if any.  Moreover, if we do end up seeing a connection, it won't be something that happens in a big, obvious way.  Rather, it would materialize slowly and it would be muddied by a multitude of more relevant variables.

Inflation is at the heart of the issue.  Bonds are essentially loans.  Investors purchase bonds in exchange for the right to receive payments over time on a predetermined schedule.  If the cost of a Grande Skinny Caramel Macchiato was $4.55 when the investor initially bought a bond, and if the monthly payment received on the bond was $4.55 after taxes, the investor could enjoy that delicious beverage once a month (or purchase one for someone who enjoys drinks with long names).

But now say inflation brings the cost up to $6.10.  Because the terms of the bond are predetermined, the investor will have to order something with fewer words or in a smaller size.  Inflation erodes the purchasing power of dollars and thus erodes the returns realized from investing in bonds. The investor is still getting the same $4.55, but that $4.55 won't buy what it once did.

To get a quick idea of how important inflation is to bonds/rates at the moment, we need only look at a chart of bonds with volume.  Whereas the big jobs number (nonfarm payrolls, or NFP) is the perennial top dog in terms of economic data that impacts bonds, the big inflation number (the Consumer Price Index, or CPI) has recently drawn out much more volume. 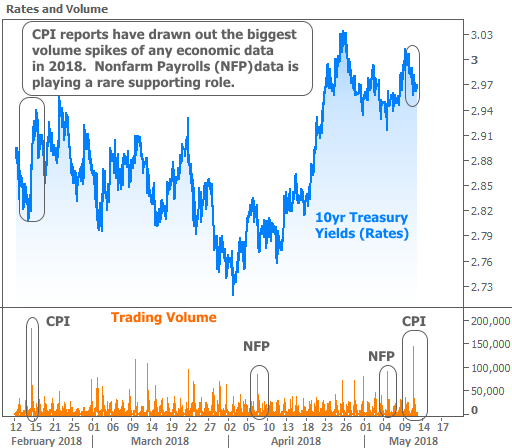 If inflation matters so much to bonds, what matters to inflation?  Oil is a key consideration because it's generally connected to transportation costs.  If a company has to pay more to move its goods, some of those costs are passed on to consumers (known as "supply push" inflation).  Granted, this isn't a perfect relationship because consumers are less able to contribute to inflation from the demand side ("demand pull" inflation) if they're paying more at the pump.  These subtleties account for the imperfections in the following chart, but the general idea holds true. 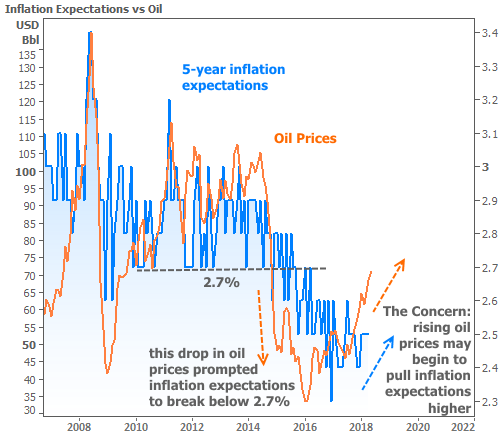 Investors are keeping a close eye on the bounce in oil prices and the potential bounce in inflation.  They're worried we'll see "the reality" in the following chart finally shift toward "the fear" when it comes to the most important inflation number (Core annual CPI). 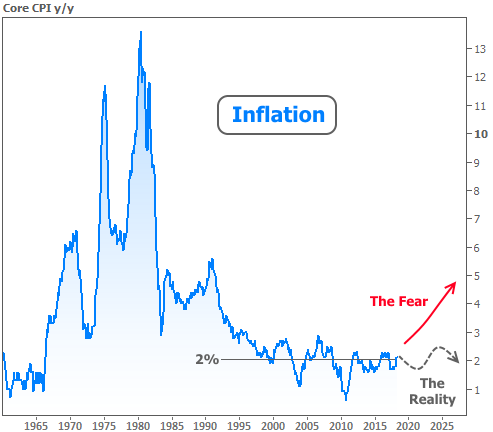 Given bonds' fear of inflation and inflation's relationship to oil, we wouldn't be crazy to assume oil prices can have an impact on rates. Granted, other variables make for questionable shorter-term correlation, but longer time frames look much less questionable. 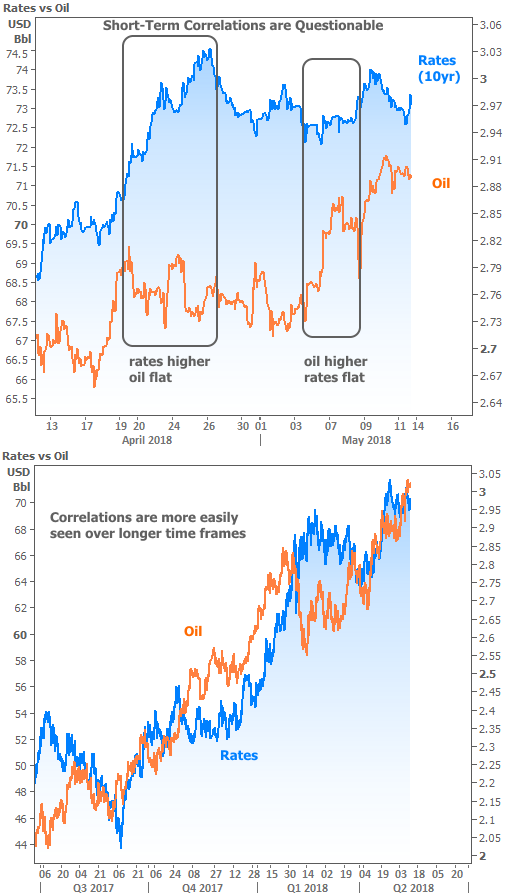 Upward pressure on rates is a big deal at the moment because they're currently very close to the highest levels in more than 4 years.  Most recently, a key level has emerged in 10yr Treasury Yields (the yardstick by which all other long term rates in the US--like mortgages--are measured).  Earlier this year, 2.95% acted as a firm ceiling for rising rates before finally giving way in late April.  Since then, rates have made repeated attempts to get back below.  All have failed. 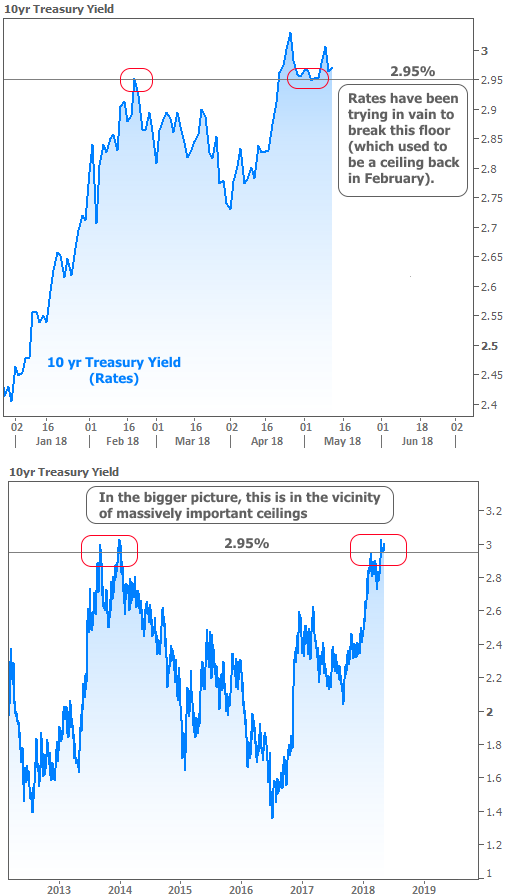 As the chart above suggests, the inability to get back below 2.95% could mean that rates are forced to break above 2013/2014 highs--something that's definitely on the radar of many market watchers.  Higher mortgage rates are obviously somewhat of a hindrance to the housing market, but how much objective damage could they cause?  Past precedent is no guarantee, but it's encouraging (at least in terms of the ability of PURCHASES to weather the storms of rising rates).

The following chart shows past examples of mortgage rate spikes and the corresponding changes in purchase and refinance applications.  Logically, refis get hit hard.  Purchases, on the other hand, seem to escape with barely a scratch.  This has been especially true of the current rising rate environment that began in late 2016. 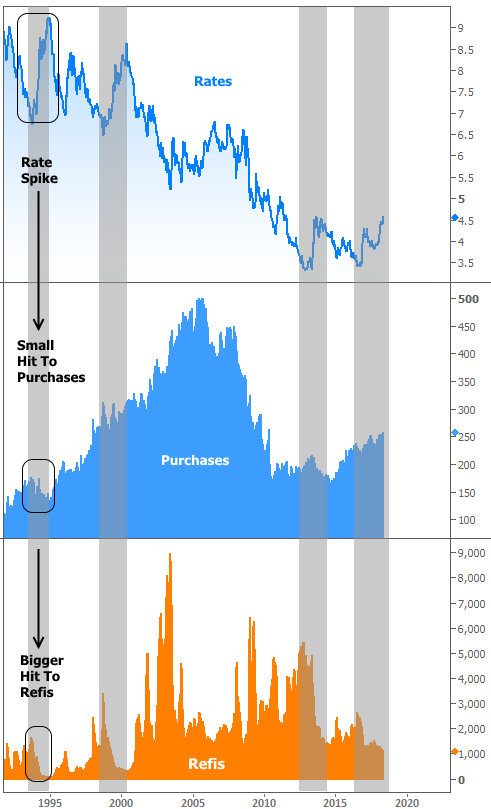 In short, rates will have SOME impact on purchase demand, depending on how much they rise and how quickly, but there are more important headwinds.  These include the usual suspects like ultra tight supply of new homes, and a shortage of skilled labor for builders.  Both were noted in separate reports this week from the Mortgage Bankers Association and the National Association of Home Builders.

Despite the construction headwinds--or perhaps because of their effects (persistently higher home prices)--a Fannie Mae survey showed a record high in its Home Purchase Sentiment Index.  And if you prefer to look at such numbers through a darker lens, increased selling interest could also be another reason to ask the question posed in last week's newsletter.