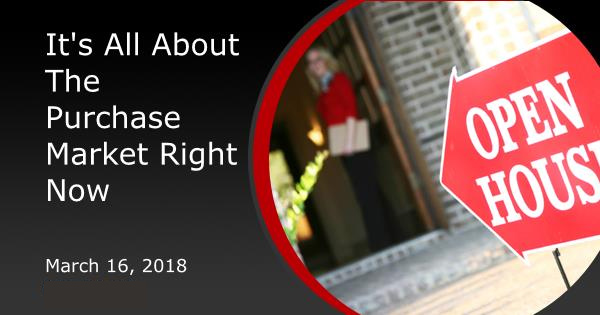 It's All About The Purchase Market Right Now

It's no great mystery that refinance activity slows to crawl any time rates are at long-term highs, but what about the purchase market? Despite lingering inventory and affordability challenges, purchases aren't simply 'surviving' the recent upturn in rates.  They're arguably thriving.

The Mortgage Bankers Association (MBA) released weekly purchase and refi application numbers on Wednesday.  The "lowest refi numbers in nearly a decade" jumped out as a gloomy headline, but consider the following chart.  Refis are merely sideways in the same low range that's been intact for more than a year.  Meanwhile, purchase activity has ratcheted steadily higher.  It's even done a better job of coping with the recent rate spike compared to the 2013 rate spike. 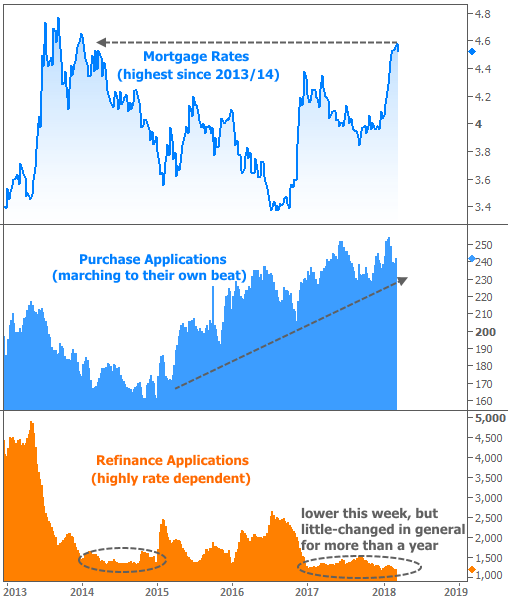 This week's construction data from the Census Bureau tells a similar story.  Building Permits and Housing Starts (breaking ground on new construction) lost some ground compared to the previous report, but the overall trend remains unequivocally positive.  Moreover, heavy declines in the multifamily sector accounted for all of the weakness in Housing Starts and most of the weakness in Permits. 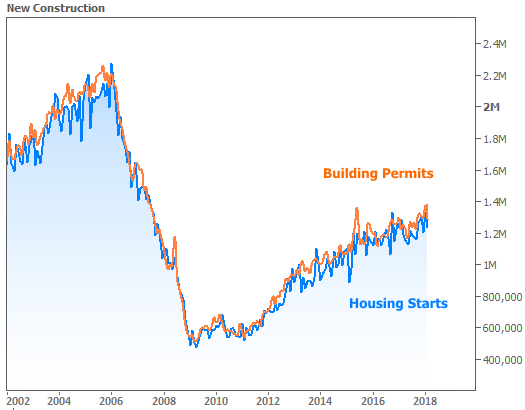 Given that trend in construction numbers and purchase applications, it's no surprise to see builder confidence near all-time highs according to the National Association of Homebuilders (NAHB).  Here too, the data was slightly weaker than the previous month (their Housing Market Index fell to 70 from 71), but the longer-term trend speaks for itself. 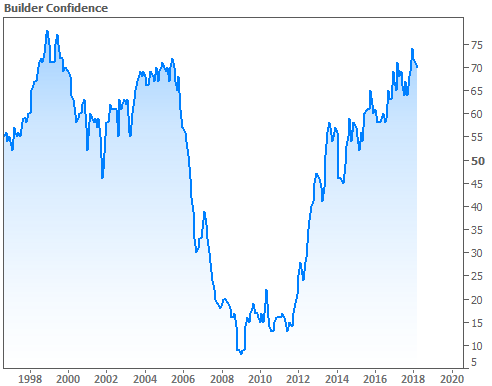 In terms of this week's financial market movements, things were fairly quiet in the bigger picture with modest declines for stocks and bond yields.  The two generally huddled together throughout the week--typical behavior amid broader uncertainty. 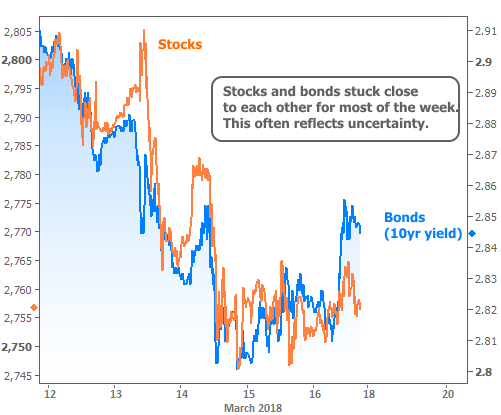 So what's fueling the uncertainty?  On Tuesday, stocks fell in response to the President confirming Larry Kudlow would replace Gary Cohn as the top economic advisor to the White House.  Several news stories also suggested the administration could soon impose new tariffs on China.

On Wednesday, the Atlanta Fed released a periodic update of its GDP tracking (referred to as GDPNow).  Unlike a forecast based on economic research, GDPNow attempts to emulate the math underlying the actual GDP number, but to do so in a far more timely manner.  This week's update showed a sharp decline, bringing it below the blue chip consensus for the first time.

This accounted for the week's strongest move toward lower interest rates, with 10yr yields falling quickly to 2.80%.  From there, rates reenacted their last encounter with 2.80%, unfortunately.  That's been a tough floor to break for more than a month now, despite several attempts. 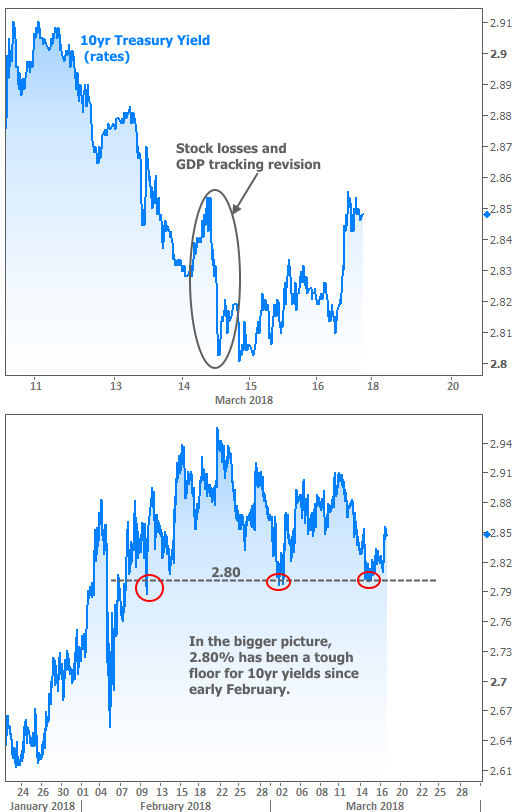 One thing to keep in mind as we discuss rates' unwillingness to push past recent lows, or the huddling together of rates and stocks discussed above, is that we have an important Fed Announcement coming up next week.  Most economists and traders agree that the Fed will hike its policy rate.  In fact, that's essentially a given, and thus already priced-in to current trading levels.

Of far more interest for financial markets is the TONE the Fed sets going forward.  This will be accomplished via the Fed's economic projections (which include their rate hike outlook) as well as Jerome Powell's first press conference as Fed Chair.  These ancillary events only occur at 4 of the year's 8 scheduled Fed meetings, and they're increasingly relied-upon for insight to the evolution of the Fed's thinking.