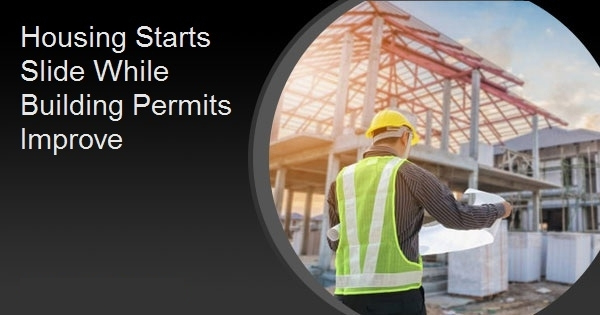 The U.S. Census Bureau and the Department of Housing and Urban Development reported a small improvement in the number of permits issued in September after a dismal report in August. Housing starts, however, gave back much of the prior month’s double-digit gains.

Permits were issued for construction of residential units at a seasonally adjusted annual rate of 1.564 million units in September, a 1.4 percent increase from the rate of 1.542 in August. This leaves the permitting rate down 3.2 percent compared to September 2021.

The permitting rate was slightly higher than expected. Analysts polled by Econoday had a consensus estimate of 1.550 million units while Trading Economics’ consensus was 1.530 million.

Housing starts had jumped by 12.2 percent in August to a rate of 1.517 million and was then adjusted upward to 1.566 million. However, the seasonally adjusted September rate dropped back by 8.1 percent to 1.439 million, 7.7 percent below the September 2021 figure.

The consensus estimate for housing starts from both the above sources was 1.475 million.

Residential construction starts numbered 124,400 on an unadjusted basis during the month, including the 75,400 issued for single-family dwellings. The comparable numbers in August were 140,100 and 83,600.

The National Association of Realtors’ chief economist says it is understandable that homebuilders are cautious given declining home sales and recent data indicating that apartment rentals are slowing. However, Lawrence Yun notes that the September annualized rate of 1.44 million is lower than the historical average of 1.5 million needed to accommodate the rising population. He adds, “Nearly 6 million net new jobs have been added to the economy in the past 12 months. The rental vacancy rate of 5.6 percent nationwide is at a 30-year low, and the homeowner vacancy rate of 0.8 percent is at a 40-year low. The inventory of homes listed for sale has gone up a bit due to lengthening days-on-market, though well below pre-pandemic inventory conditions and still near historic lows. Meanwhile, new listings coming onto the market are actually lower this year compared to last year due to the interest rate lock effect, whereby homeowners are unwilling to trade away their 3 percent mortgage rate. When mortgage rates retreat after inflation is tamed in the coming years, we could again encounter an acute housing shortage.”

The permitting rate in the Northeast fell 9.4 percent for the month but is up 3.3 percent on an annual basis. Housing starts fell 12.5 percent but were 15.7 percent higher than in September of last year.

The Midwest saw a 4.0 percent improvement in permitting in September, leaving the rate down 2.3 percent year-over-year. Starts were also down, falling 2.7 percent and 10.8 percent from the two earlier periods.

The rate in the South rose 3.1 percent in September but permits fell by an identical amount compared to September 2021. Starts declined by 13.7 and 8.8 percent, respectively.

The West eked out an 0.3 percent improvement in permits but still lagged the rate a year earlier by 5.8 percent. Starts rose 4.5 percent but fell behind the prior September by 11.2 percent.