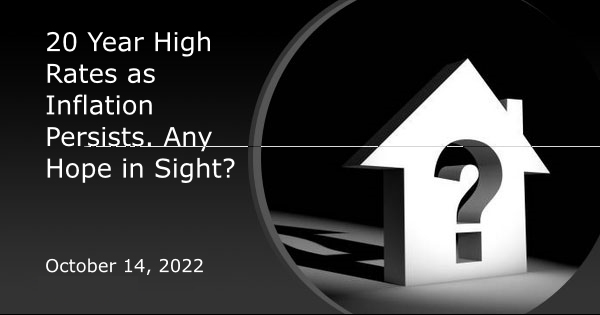 20 Year High Rates as Inflation Persists. Any Hope in Sight?

Unsurprisingly, the market remains intently focused on inflation as the key driver of Fed policy and rate volatility. This week, the biggest inflation report combined with more UK market drama to push rates to another 20yr high.

The UK doesn't typically factor into our assessment of market movement in the US, but the past 3 weeks have been a notable exception.  The following chart shows how much bigger the move has been overseas.  Viewed in this light, US rates look almost resilient.

Resilience may have been in better supply were it not for this week's much-anticipated release of the Consumer Price Index (CPI), the most influential monthly report on inflation and, indeed, the most influential of all the economic reports given the current preoccupation with the I-word.

Rates were near their best levels of the week before CPI, but quickly spiked in its wake. CPI caused rates to spike because it showed inflation was even higher than the already-high expectations. The more important "core" CPI made a particularly troubling move back up to the highest levels in decades.

Bonds/rates don't like inflation anyway, but they really don't like it in 2022 when inflation is high enough to fuel the most aggressive Fed rate hike campaign since the 80s.  This report alone was responsible for bumping the Fed's rate hike outlook to nearly 5.0% by the middle of next year.

It's not just rates that suffer from Fed rate hikes.  Stocks also tend to take a hit when the Fed enacts tougher policies or when economic data looks like it will add to the Fed's austerity.  This combination of "suggestion" from the data and "confirmation" from the Fed is the thesis for 2022.  Massive losses in stocks and bonds are the conclusions.

Here's a closer look at stocks and bonds this week:

Notably, both were able to recover surprisingly well after the inflation data, but not for sustainable reasons.  If those reasons are important to you, here's a quick detour with some more advanced concepts.  Otherwise feel free to skip ahead.

Behind the scenes, UK financial markets were in the midst of some major improvements on Thursday.  The following chart shows the absolute change in bond yields in the UK and US this week.  The drop in UK yields from the opening bell on Thursday the 13th through Friday morning was staggeringly big (0.55%).

Over the same time, US 10yr yields were roughly unchanged.  The market phenomenon of "short covering" played a role as well.  This occurs when rates fall enough to make buyers out of the traders who'd previously bet on rates moving higher.  That extra buying acts to push rates even lower, thus perpetuating the cycle and resulting in a "short squeeze."

On Friday, bond yields found reasons to move back up. The supersized bounce in British bond yields was only part of the explanation.  Fed speakers were making the rounds, acknowledging that global financial risks were a consideration, but not one that derails their rate hike goals.

Kansas City Fed President Esther George noted "It's not only the elevated pace of inflation that is concerning, but its broad-based nature. We may have to keep at this awhile. The terminal rate may need to go higher and stay longer to cool prices."

The "terminal" rate is just another word for the ceiling on this particular Fed rate hike campaign--something we might encounter in 2023 if forecasters have it right.  The terminal rate is currently almost 5% and George certainly knew this before those remarks.

St. Louis Fed President Bullard commented on the inflation data, saying that it suggested "inflation had become pernicious and difficult to arrest."  This isn't what you want to hear from members of the Fed if you're hoping to see a softer stance on rates.

There was other data as well.  The Consumer Sentiment index for October showed a surprise uptick in inflation expectations--a metric that's also closely watched by the Fed.  This uptick may get lost in the shuffle of the longer term chart below, but importantly, it was the first time that the 1-year outlook moved higher since March 2022.

Between unfriendly Fed comments, unfriendly inflation implications in the Sentiment data, and the well of short-covering running dry for bond buyers, rates drifted painfully higher with 10yr yields ending the week over 4% for the first time since 2008.  Things were even worse for mortgage rates as they ended the week at the highest levels in more than 20 years.

Here's a closer look at daily vs weekly rates as they've risen from just over 3% to roughly 7% in less than a year (and 2% in the past 2 months!):

The initial onset of the pandemic was the only other time in the past 40 years where rate volatility has been this high, and that only lasted 2 months.  The current stint of volatility broke into "high" territory 9 months ago and hasn't really looked back.  No one but those of mortgage-watching age in the early 80s has ever seen anything like this.

How about that hope?  Is there any in sight?

As is so often the case when discussing the future of the financial market, "it depends."  While it doesn't make sense to outright PLAN on favorable rate outcomes in this environment, we can at least observe that this week's weakness seems to have encountered some sort of resistance around the 4.0% level in 10yr yields and/or the 3600 level in the S&P.

Technical analysts could easily draw horizontal "support" lines at those levels and find ways to argue for a bounce.  The better bet would simply be to keep an eye on those levels as important lines in the sand.  The market is telling us they matter.  At the very least, we could consider that traders are starting to ask whether enough is enough when it comes to inflation implications and the Fed's policy response.  Ultimately, if the data finds a way to get even worse, the Fed will have an open door to get even crankier and rates could unfortunately head even higher.  So yes, it depends on the data, but all of the above could be approached with a bit of hope for a less dire outcome.