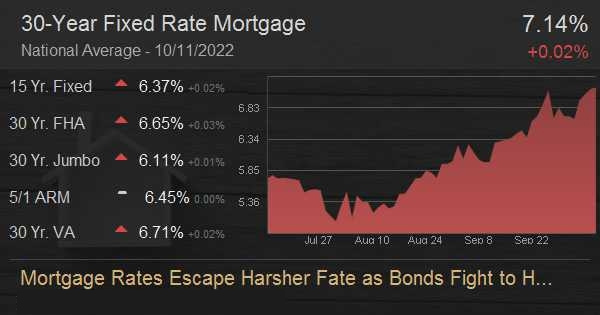 For many of the holidays in the US bond market, relevant overseas bond markets are also closed.  The opposite is true on several occasions with Indigenous Peoples Day being one of them.

In other words, the rest of the world was free to trade bonds as normal on Monday while the US was limited strictly to the electronic futures market.  But what does any of this has to do with mortgage rates?

Mortgage rates are based on the movement in mortgage-backed-securities (MBS, also closed yesterday).  MBS almost always move in the same direction and in roughly similar proportion to certain US Treasury yields--the core of the US bond market.  US Treasuries, in turn, frequently take cues from overseas bond markets, even if they are just as likely to march to their own beat during domestic hours.

With all that in mind, Treasury futures took a beating on Monday as the UK bond market once again traded in panic mode.  The high rate implications were still in place as of Tuesday's overnight trading.  10yr Treasury yields broke above 4.0% yet again and continued struggling to move much lower until later in the trading day.

The weaker opening levels resulted in mortgage rates remaining at long term highs, but they would have been higher highs had it not been for an admirable show of support in the bond market.  In fact, by the afternoon hours, Treasuries and MBS were both very close to the same territory seen on Friday afternoon--effectively holding recent ceilings albeit with just a bit of overrun.

Bigger risks remain--especially on Thursday morning as we'll see the next installment of the important inflation data in the Consumer Price Index (CPI).  This has caused several big rate spikes this year and it is currently the most important monthly economic report when it comes to the potential impact on rates. There's no way to know ahead of time if the impact will be good or bad, only that the potential for a big reaction is extremely high.