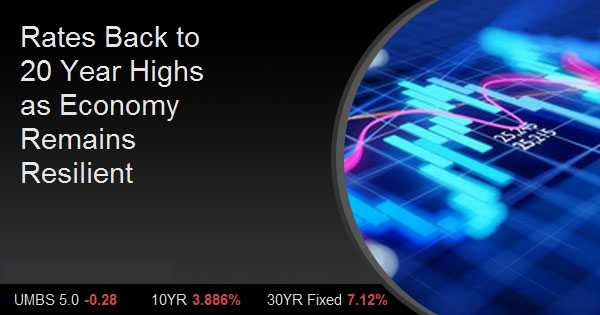 Rates Back to 20 Year Highs as Economy Remains Resilient

The resilience of the economy is a matter of debate with different cases to be made depending on the data. But when it comes to the Fed's favorite reports, the data hasn't given them any reason to go easy on rates.

The Fed doesn't directly dictate mortgage rates, but it does set the Fed Funds Rate, which has far-reaching effects.  Financial markets can also bet on the future level of the Fed Funds Rates via securities unsurprisingly named Fed Funds Futures.  This allows the market to constantly adjust whereas the Fed only makes changes on a scheduled basis, 8 times per year.  Here's how the implied Fed rate has shifted recently for the December 2022 and June 2023 Fed meetings:

The Fed Funds Rate only applies to the shortest-term lending, which is one reason it's not always highly correlated with mortgages (which tend to last 5-10 years on average.  Longer term rates can move in very different patterns compared to short-term rates.  But longer-term rates often line up much better with those longer run Fed rate expectations as seen in the green line above and below.  The next chart shows the June Fed Funds expectations overlaid with 10yr Treasury yields (a quintessential benchmark for longer-term rates in the US).

Not a perfect match at all times, but highly correlated in the past few weeks.  For even better correlation, we can compare Treasuries and mortgage rates which, as of Friday, moved back up to the highest levels in 20 years.

Why are rates so high?  That's a question that we've been answering again and again throughout 2022, but the answer hasn't really changed in terms of its essential ingredients.  They are as follows:

All of the above led the Fed to make drastic changes to the Fed Funds Rate and the bond buying programs that helped keep mortgage rates near all-time lows as recently as late 2021.  The Fed's sense of urgency is higher than it otherwise would be due to parallels it perceives to 1980, when then Fed Chair Volker cut rates from 16% to 11% at the first sign of lower inflation only to hike them to 19% 2 months later when inflation proved resilient.  The initial rate cuts by Volker were widely criticized as a "Fed policy error"--one that multiple Fed speakers have recently vowed to avoid in the present.

In other words, the Fed is determined to hike rates as high as it can and keep them there as long as it can, even if that means the economy suffers.  In fact, the Fed actually WANTS to see a measured amount of suffering in order to confirm that it has hiked rates enough.  To make matters worse, they're not really considering the mortgage or housing market in that endeavor for two reasons:

Housing/mortgage data notwithstanding, the rest of it has yet to send any red flags serious enough for the Fed to reconsider its unfriendly stance on rates.  That's not to say there aren't some signs of contraction in major economic indices, but so far, it's been the manufacturing sector more than the services sector, and it's not uncommon for manufacturing to oscillate in more frequent boom/bust cycles even as the broader economy chugs along.

Both of the big ticket Purchasing Managers Indices (PMIs) from the Institute for Supply Management (ISM) were out this week.  The resilience in the services sector means the Fed is far from concerned.  Both lines would need to be moving into the contraction zone for that to change.

We also received the latest update on the labor market via the big monthly jobs report.  Apart from the big inflation indices, the jobs report is the most significant report for the Fed, and one that is certainly being watched for the desired signs of labor market weakness.  Fortunately for people who like jobs, but unfortunately for interest rates, the numbers remain anything but weak.

Granted, that average job count will likely continue to drop and the strength hasn't yet offset the post-covid weakness when it comes to where we would have otherwise been, but the point is that job creation at current levels is still higher than the Fed expected it would be.  Perhaps more telling and much easier to understand would be the fact that the unemployment rate is back to the lowest levels since the 1960's after bumping just a bit higher last month.

Here too, anyone who wanted to paint a gloomier economic picture could find ways to poke holes in the message of economic strength, but the fact that such a debate can even exist in a market where the Fed has been so clear about its intentions is evidence of those intentions being justified.  Even if there are "yeah buts" regarding this data, it would still be best filed under the category of "resilience" as opposed to "showing obvious damage from the Fed's policies."  Once that damage shows up, assuming it does so in concert with a sustained drop in inflation, then we'll finally see a softer side of the Fed.

When that begins to happen, it will take more than one decisively lower inflation reading to change the conversation, but to reiterate, the major inflation indices are the most important reports right now with the Consumer Price Index being head and shoulders above anything else in terms of importance (notably, the Fed prefers another index, PCE, but CPI comes out 2 weeks earlier so that's what markets react to).  Why so much backstory on CPI if we didn't get an update this week?

Because it's coming this Thursday (10/13/22) and it may well have the power to decide if rates hold in line with the ceiling of 20-year highs or punch a hole up to the 2nd floor.