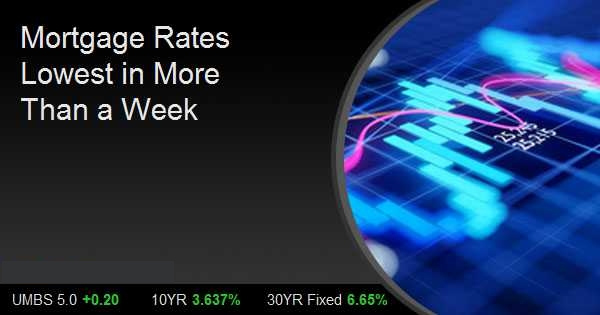 Mortgage Rates Lowest in More Than a Week

We're measuring our mortgage rate spikes in terms of years and decades at the moment.  Progress in the other direction has been elusive--especially since the beginning of August.  Since then, mortgage rates haven't been able to string together any sort of winning streak lasting more than a few days.  On a slightly broader note, we haven't been able to say "lowest rates in 2 weeks" in almost 2 months now.

If the present stability continues, we'll be very close to breaking that curse over the next few days.  Today's rates weren't markedly different from yesterday's, but both days are much better than last week--especially the 20-year highs seen on Tuesday.  During that time, the average lender moved back down from the low 7s to the mid-to-high 6s when it comes to conventional 30yr fixed rates.

Big disclaimers remain necessary when discussing mortgage rates these days.  Not only is pricing more stratified than normal between lenders and loan products, but so is pricing and quoting strategy.  In most cases, any given mortgage rate quote is simply one option--one combination of upfront costs and an official interest rate (aka the "note rate," so named because it's the interest rate on the mortgage note).  For most of the past decade, lenders generally quoted rates with lower upfront costs.  At present, some lenders can't do that due to their funding channels.  Others choose not to for a variety of reasons.  The point here is that any interest rate in a news headline or even in a graph/table/etc must be qualified based on the upfront point implications.  The even better point is that any given rate tracking resource is best used to gauge MOVEMENT as opposed to outright levels.  Notice the differences in MND's daily rate and the weekly rates from MBA/Freddie Mac:

They can be quite different at any given moment in time, but are generally always moving in the same direction and in similar proportion.

Ultimately, whether or not the recent winning streak continues depends on the incoming economic data.  It was today's job openings data that helped rates avoid drifting higher mid-day.  Tomorrow most likely depends on the outcome of the ISM Services report at 10am ET, barring some unforeseen shock or meaningful comment from a Fed speaker