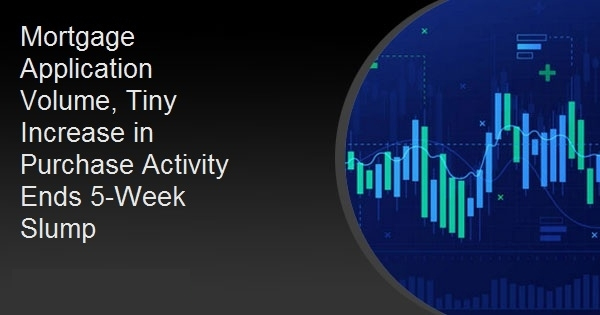 Only a slight uptick in purchase mortgage applications kept all last week’s volume indicators from falling for the fifth straight time. The Mortgage Bankers Association (MBA) said its Market Composite Index, a measure of mortgage loan application volume, decreased 1.2 percent on a seasonally adjusted basis during the week ended September 9. The results include an adjustment for the observance of Labor Day. On an unadjusted basis, the Index decreased 12 percent compared with the previous week.

The Refinance Index decreased 4 percent from the previous week and was 83 percent lower than the same week one year ago. The refinance share of mortgage activity decreased to 30.2 percent of total applications from 30.7 percent the previous week.

“The 30-year fixed mortgage rate hit the six percent mark for the first time since 2008 – rising to 6.01 percent – which is essentially double what it was a year ago,” said Joel Kan, MBA’s Associate Vice President of Economic and Industry Forecasting. “Higher mortgage rates have pushed refinance activity down more than 80 percent from last year and have contributed to more homebuyers staying on the sidelines. Government loans, which tend to be favored by first-time buyers, bucked this trend and increased over the week, driven mainly by VA and USDA lending activity.”

Added Kan, “The spread between the conforming 30-year fixed mortgage rate and both ARM and jumbo loans remained wide last week, at 118 and 45 basis points, respectively. The wide spread underscores the volatility in capital markets due to uncertainty about the Fed’s next policy moves.”