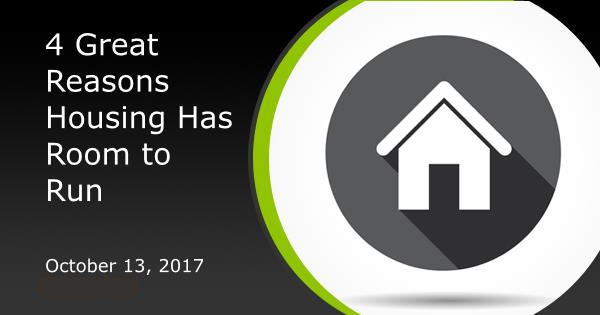 Rates have been doing more rising than falling recently. Home sales have leveled-off by some counts, and we're entering the slower time of year. If you wanted to be pessimistic about the housing market, you could certainly make a case. But hidden in this week's data and events are 4 pieces of evidence for a solid opposing argument.  Let's hear them!

The first piece of evidence was hidden in plain sight in the form of Friday's Consumer Price Index (CPI).  This important inflation report has had a big impact on interest rates in 2017.

Inflation data matters most when it shows prices departing from expectations.  If the data suggests the Fed needs to hike rates faster or slower, bond markets will quickly adjust to account for the shift in expectations. This was arguably the case in 2015 when inflation first began to lift-off from an extended stay below 2%.

As you'd expect, rising inflation coincided with rising rates throughout 2015.  The Fed increasingly toughened its stance and ultimately hiked rates for the first time in nearly a decade at the end of that year.  From there, inflation flat-lined, and so did Fed rate hikes.

At the end of 2016, the Fed felt there were other reasons to continue hiking rates (strong labor market, potentially inflationary policies associated with the new administration, etc.) even without an uptick in measured inflation.  The relative increase in the pace of rate hikes is easily seen in the following chart of the Fed Funds Rate. 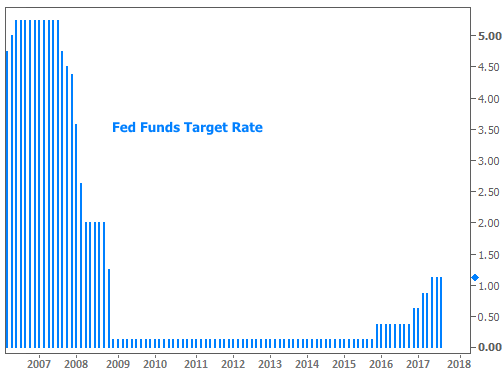 But while the Fed has continued to hike rates and take other steps to remove accommodation (i.e. the balance sheet normalization plan), inflation hasn't risen to the Fed's defense.  In fact, inflation is saying "not so fast!" 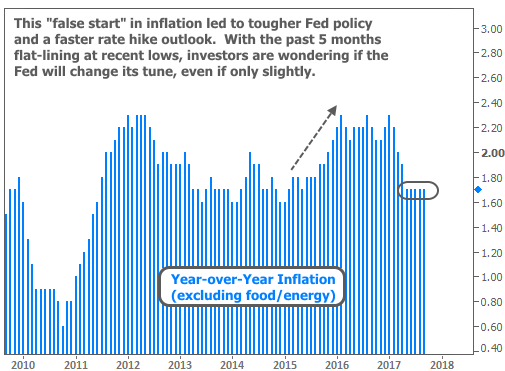 The sharp drop to near-recent-lows is a key reason that rates haven't moved higher as quickly as many forecasters predicted.  This week, analysts expected inflation to begin lifting-off from those lows, citing the likely impacts from higher fuel prices due to the Hurricane season.

Fuel prices did indeed rise abruptly in the report, but the other price measurements fell by more than enough to offset the fuel effect.  That made this inflation reading decidedly low, with no great counterpoints for those who are predicting a quick turnaround.

The good news about low inflation is its impact on rates.  In fact, the stock market doesn't mind the news either because it suggests a more accommodative stance from the Fed.  Stocks were already drifting higher due to earnings reports earlier in the week, but the inflation data pushed major indices to new intraday highs at the opening bell. 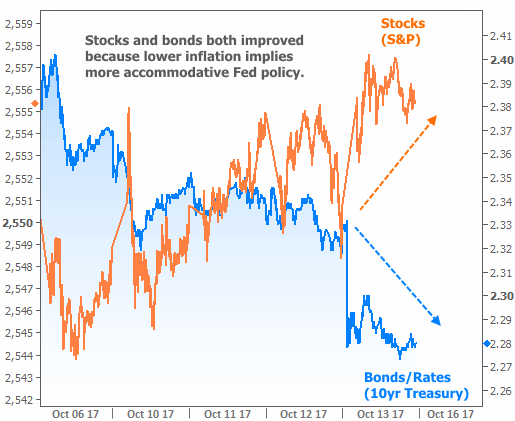 Turning our focus exclusively to rates, some good things are happening.  Not only did the inflation data help them break through 2 important floors, it also reinforced a bigger-picture ceiling around 2.40% in terms of 10yr Treasury yields (the most widely-followed benchmark for momentum in longer-term rates like mortgages). 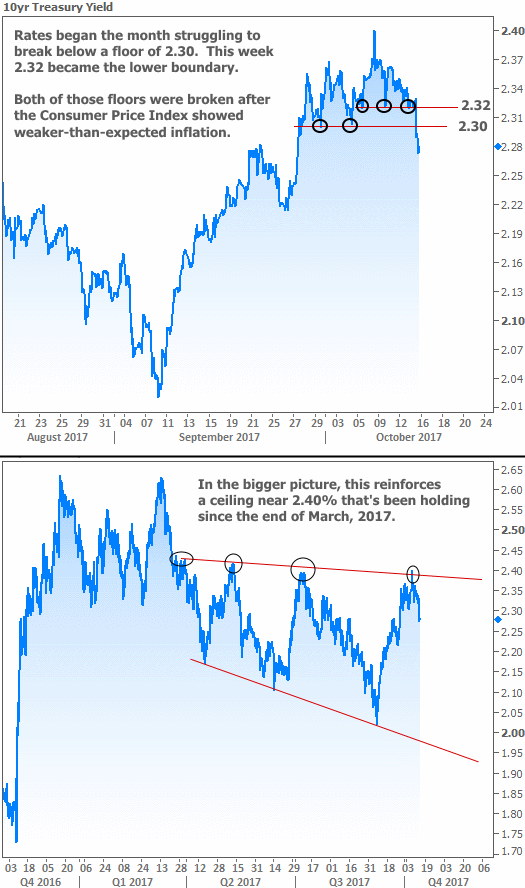 The final 2 of our "4 reasons" stem from housing-related news stories this week.  The first covers a report from the Urban Institute (UI) that discusses mortgage lending guidelines.  In a nutshell, UI says guidelines could be TWICE as loose as they are now and that would merely bring us back in line with historically normal/healthy levels.

It's hard to quantify exactly what "twice as loose" would look like in practice, but most market participants would agree there are many more potential buyers to be brought into the market from guideline changes before we're anywhere close to the riskier landscape seen before the mortgage meltdown.  This process has already been happening slowly, and the good news is there's no reason it can't continue.

The second piece of news covers an interesting report from CoreLogic that compares the current housing boom/bust cycle to past examples.  The takeaway is fairly simple: home prices have taken far longer to recover than in previous cycles.  Moreover, in many areas, prices STILL haven't crested pre-crisis levels, thus implying more room to run.  Of course this will vary from market to market, but the underlying point is that a lot of the seemingly uncanny price appreciation we've seen in the past 5 years has to do with how hard we fell at the start of the crisis.