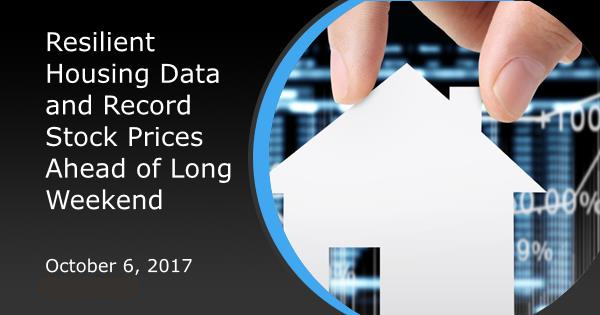 While Columbus Day no longer marks a 3-day weekend for everyone, financial markets will be closed until Tuesday.  It's not uncommon to see market volatility increase ahead of 3-day weekends and this one was no exception.

The week's most notable development was an impressive winning streak for stocks. The S&P 500 hit record highs for a 6th straight day before finally leveling-off on Friday.

In fact, through Wednesday, rates had actually improved on the week.  Things changed on Thursday when Congress approved a budget blueprint paving the way for an eventual tax bill.  This resulted in a huge move higher for stocks, but rates managed to hold their ground fairly well.  After some volatility surrounding Friday's jobs report, rates drifted only slightly higher to end the week. 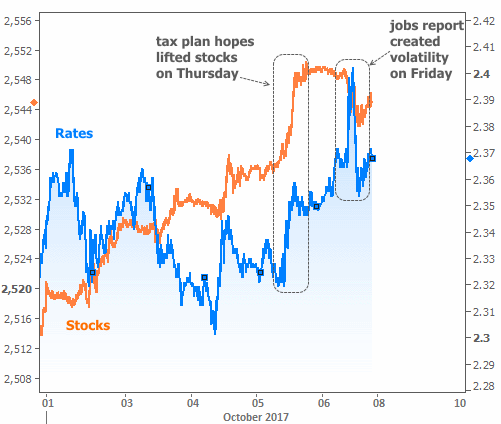 Even if we zoom out to a bigger picture view, rates haven't been moving higher nearly as fast as stocks might suggest. 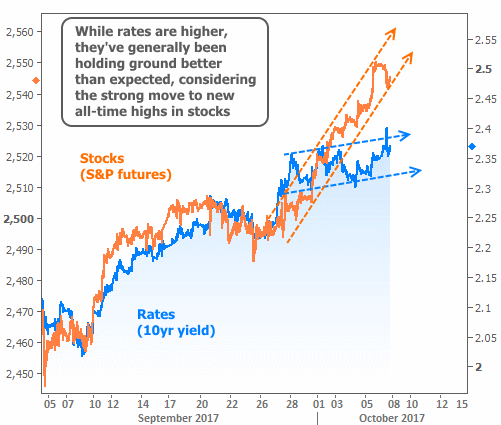 Shifting gears from "rates in general" to mortgage rates specifically, most indices continue showing the average conventional 30yr fixed rate just under 4% for top tier scenarios.  The recent move higher has taken a logical toll on refinance applications, but purchase applications have been doing a good job of picking up the slack.

Some broader housing metrics are even more encouraging.  CoreLogic updated its Home Price Index (HPI) this week, showing an impressive jump in annual appreciation from 6.7% to 6.9%.  Even though the firm notes that nearly half of the biggest housing markets are overvalued, CoreLogic nonetheless expects price growth of 4.7% over the next 12 months. 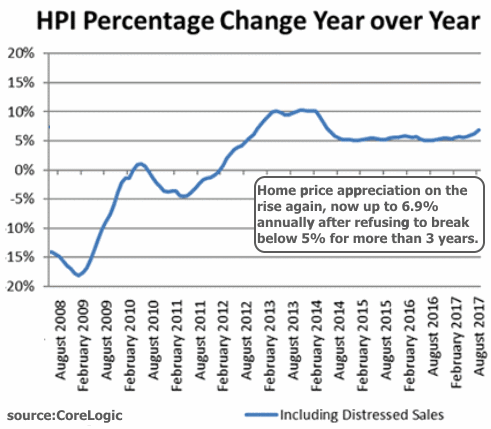 The holiday-shortened week ahead brings several important economic reports and developments that could help shape the outlook for interest rates.  The highlight will be the Consumer Price Index (CPI)--a key measure of inflation.

The Fed would like to see the Core annual rate of inflation at 2% or higher.  According to CPI data, it's held at 1.7% since June, but economists are forecasting a move up to 1.8% when next week's data is released on Friday the 13th.

Even that mere 0.01% would be plenty scary for bond markets, likely making it tough for mortgage rates to move lower.  But if CPI falls short of expectations, it could provide a clear signal for rates to recover some of their recent losses.