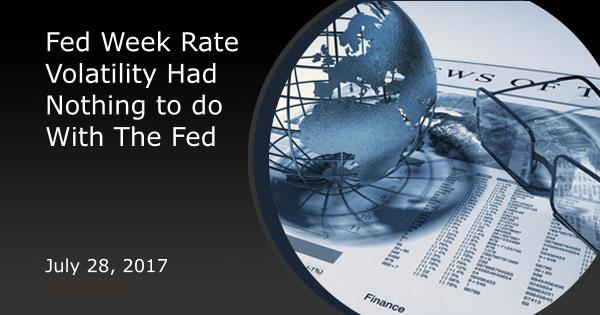 Fed Week Rate Volatility Had Nothing to do With The Fed

As far as the economic calendar suggested, the week's big to-do was Wednesday's Fed announcement.  But the biggest market movement arrived a day before, and didn't line up with any conventional motivation.  Even seasoned analysts agreed it was a relative "mystery move" that took rates to the highest levels in roughly 2 weeks.

Movement like this typically involves a few common ingredients that are always at play behind the scenes, but that have nothing to do with economic data, news headlines, or Fed policy.  These include things like imbalances in trading positions, automated trading programs designed to protect traders from unexpected movement (aka "stop-losses"), and trades required as a part of a transaction in another part of the market (which we'll discuss in more detail below).  All were seen on Tuesday.

A relative imbalance in trading positions set the stage for the quick move.  Specifically, more bond traders were betting on rates continuing to move lower after the last rate spike was averted in early July.  That means more traders had those defensive stop-losses in place in the event something came along to push rates higher.

This process began with European bond yields moving higher overnight.  This was the spark that set the dry tinder ablaze.  US rates didn't rise as quickly as European rates at first, but it was enough for those defensive stop-losses kick in, thus adding to the upward momentum.  Traders looked to other traders for cues.  Several big trades appeared on widely-followed reporting systems, leading other traders to follow suit, pressuring rates higher still.

Think of this like a massive traffic jam where cars begin turning around and heading the other direction.  Those bigger trades would be like someone rolling down their window and saying "hey pal... I was just at the front of the line and there's a big accident.  They said it would take 4 hours to get traffic moving."  As you can imagine, only the people that absolutely couldn't take any other road would remain in position.

With the benefit of hindsight, we'd also come to suspect the corporate bond market played a role in Tuesday's weakness.  Big corporate bond deals often involve the selling of US Treasuries (which pushes rates higher) in advance of the corporate bond's official launch.  When AT&T launched a gigantic $22bln bond deal on Thursday, it helped explain some of Tuesday's big trades (the financial firms that help big corporations structure and launch these deals can begin selling Treasuries several days in advance).

When all was said and done, Tuesday's volume and rate movement was the biggest in more than 2 weeks.  In fact, even the Fed Announcement (which typically draws a good amount of volume regardless of its content) failed to get Wednesday's movement into the same league.  This comparison can be seen in the following chart, and the absence of big moves in the stock market during the same time suggests we were indeed dealing with bond-market-specific considerations.  The improvement after the Fed had more to do with Tuesday's momentum having run out of steam (the Fed said nothing new or surprising). 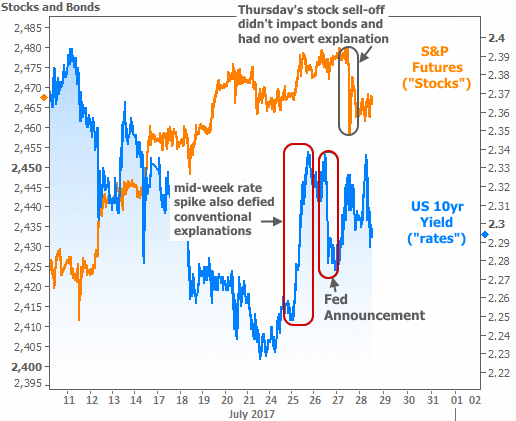 This complicates the bigger picture for rates.  While we could take heart in the fact that rates did a good job of holding just under Tuesday's ceiling for the rest of the week, we'd also have to acknowledge the "higher lows" throughout the week.  If we break rates into their inflation and non-inflation components, we can see that recent resilience has been made possible by falling inflation in 2017.  If inflation metrics continue to recover (green line in the following chart), rates will remain under pressure. 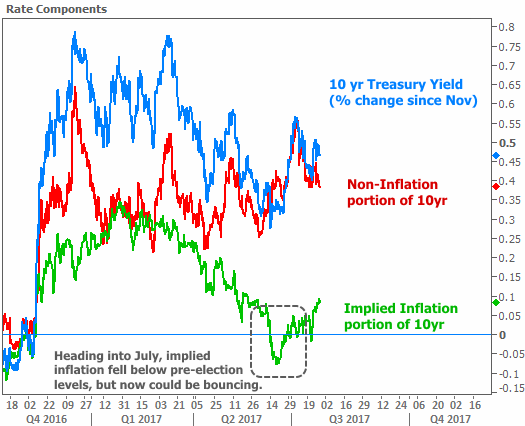 While higher rates might help cool off the record run in home prices, they wouldn't do any favors to home sales numbers.  Both New and Existing Home Sales figures were released this week, and both fell short of expectations.  That said, we're not talking about any major shifts here.  Plus, low inventories deserve as much of the blame as anything, according the the National Association of Realtors (NAR).  Freddie Mac's monthly outlook delved deeper into the inventory issue for newly constructed homes, citing increased development costs and a lack of skilled labor.