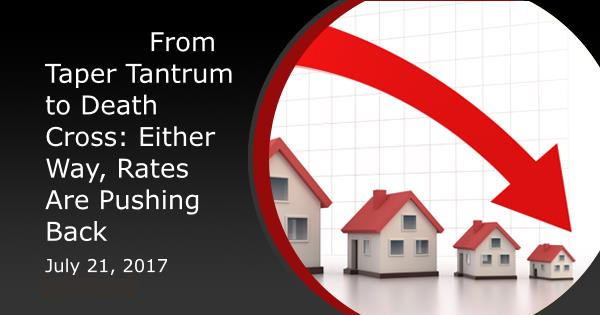 From Taper Tantrum to Death Cross: Either Way, Rates Are Pushing Back

At the end of June, European Central Bank (ECB) president Mario Draghi made a series of comments that led Market participants to believe the ECB was moving closer to announcing an end  to the ongoing expansion of its Bond buying program.  In other words, it looked like a European taper tantrum was fast approaching.

The taper tantrum refers to market movement in 2013 resulting from the Federal Reserve (The Fed) making a similar indication about its own bond-buying intentions.  Up until that point, the Fed had been expanding its bond purchases, thus adding to its balance sheet every month (they've since held it steady, while Europe's continues to expand).

Because the Fed was the largest guaranteed buyer of bonds, and because bond-buying demand connotes lower interest rates, any hints that the program would come to an end naturally put upward pressure on interest rates. Indeed, the middle of 2013 saw some of the most abrupt upward movement in rates in decades.   Because of that it was only natural for financial markets to be on edge about a similar move from the European Central Bank.

ECB officials were fairly quick to push back on the notion that they would abruptly begin reducing Bond buying. In turn, Bond traders assumed Europe wouldn't repeat some of the mistakes the Fed arguably made in 2013.  That was evident at the beginning of this week traders bought bonds somewhat aggressively.  In other words, traders were betting on the probability that the ECB would not come out with a heavy-handed announcement on Thursday.

Traders were essentially correct. ECB president Draghi reinforced the fact that accommodative policy needs to remain intact for now and that the governing Council hasn't set  a date for a change in their  current game-plan.  All that having been said, the current program is only slated to run through December 2017, so markets are well within their rights to expect the ECB to say SOMETHING about its bond buying program before then.

Why does all this matter to rates in the US? Simply put, Bond markets dictate interest rates. And Global Bond markets are interconnected to a certain extent.  That doesn't mean that rates in the US and Europe will always move up and down in lockstep, but there is certainly a high degree of correlation between the two as can be seen in the following chart (note: German 10-year yields are the benchmark for the European Union because Germany is the EU’s biggest economy). 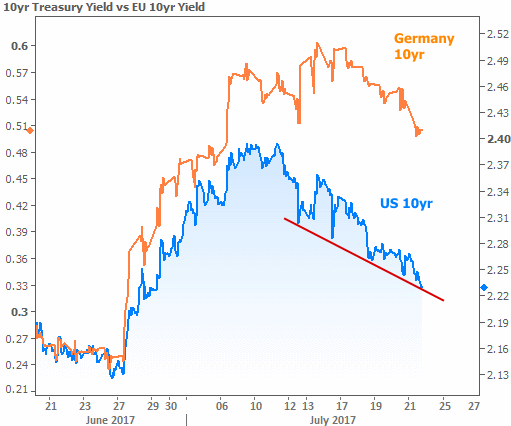 The chart also shows how European Bond movements have led the way for movements in US interest rates.   They are not the sole source of inspiration but they were the biggest source of upward pressure heading into early July. From there, political events and policy considerations for our own central bank--the Fed--took center stage.  These domestic developments helped US rates recover and outperform European rates.

The net effect has been a move to the best levels since June 27th, and a marked downtrend that remains intact heading into next week (red line in the chart above). In the bigger picture, the drop in rates has been just enough to bring about a "death cross" for the first time in well over a year.

If you tune into financial media much, you may have come across the term “death cross.” This refers to the 50-day moving average of a financial security crossing over the 200-day moving average. Market participants who rely heavily on math-based technical analysis view this as a significant turning point in long-term momentum.  These week's death cross in rates can be seen in the following chart as the red line approaching and crossing below the green line. 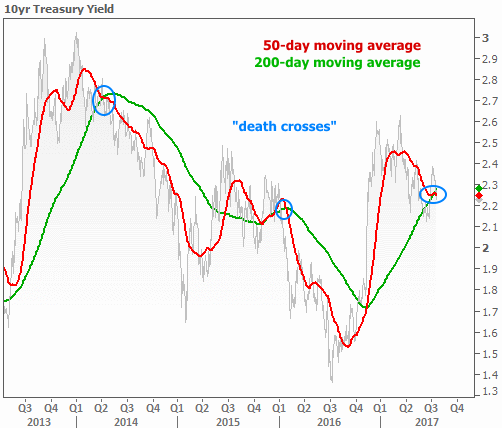 Unfortunately, this isn't quite as magical as it looks.  While it's a great talking point (especially if you don't look too far back to more stable years), death crosses say more about what's happened in the past as opposed to what will happen in the future. For example, the only two prominent death crosses in the past 5 years have logically followed the only two massive upswings in rates.  Those rate spikes easily pulled the 50 day average over the 200 day average, and all rates had to do was hold flat to bring about a death cross.

Still, momentum does tend to ebb and flow in financial markets, and these death crosses are somewhat useful as yardsticks for that momentum.  With that in mind, the current death cross serves as a pat on the back for bond markets in their push back against the late-2016 rate spike.  There's less certainty about where we go from here.

There were two big housing reports this week.  The first was the National Association of Homebuilders Housing Market Index--basically a reading on builder sentiment.  Although the index remained in line with post-crisis highs, builders cited concerns over rising material costs for an ongoing slump in confidence.

The Census Bureau's construction numbers paint a better picture.  Housing Starts and Building Permits both beat forecasts, coming in at the best levels since February and March respectively. 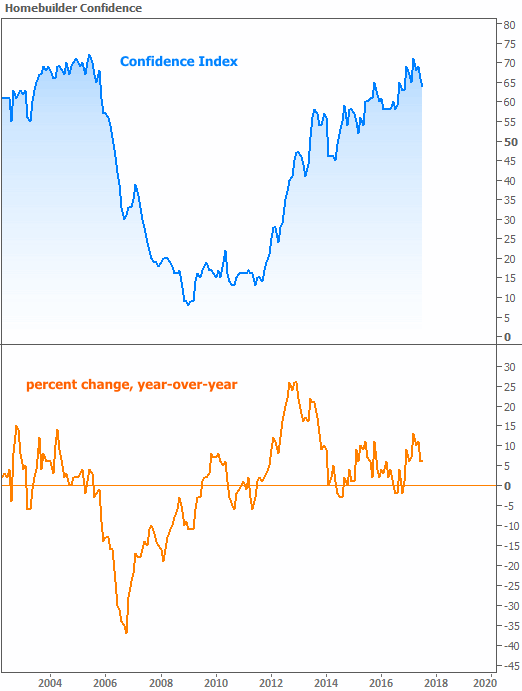 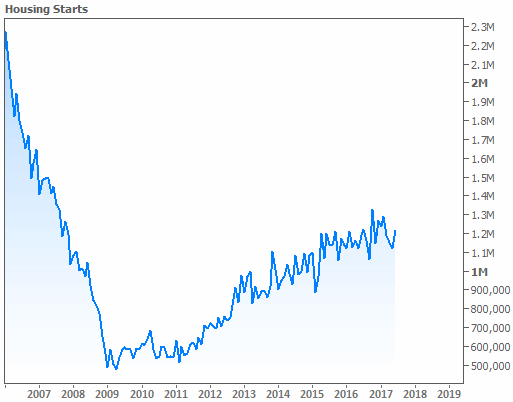