After a clear defeat last week, the mortgage rate landscape grew more complicated this week. The traditional market movers (like the Fed and economic data) are still important, but their messages occasionally clash. And sometimes they're simply overshadowed by other factors. What  do rates really care about and how might the rest of the year unfold?

Let's clear the easiest questions up first.  With corporate earnings being a big part of this week's news, and with stocks subsequently surging to all-time highs, it's fair to wonder about the effect on rates.  (From here on out, "rates" will be used interchangeably with "bonds" or "yields" because the bond market dictates rates, and rates correspond to bond yields.)

"Buy stocks, sell bonds!"  That's a common refrain in financial markets, and the underlying principle is fairly logical.  Stocks should do better in an expanding economy and bonds should do better when investors seek safety over returns.  As such, stock prices should generally rise in concert with bond yields (higher yields mean investors are selling bonds).

While this makes sense from a logical standpoint, reality is more complicated.  Things have been especially complicated since 2009, given the prevalence of intervention from the Fed and other central banks.

In this era of Fed accommodation, both stocks and bonds tend to improve when the Fed signals more accommodation, and vice versa.  After all, the Fed is essentially indicating they'll be leaving that much more money in financial markets or leaving rates low for that much longer.

This week provided a fresh example of that phenomenon as Fed Chair Yellen's prepared remarks were released in advance of her congressional testimony.  In general, markets saw Yellen as striking a slightly more accommodative tone.  Rates moved lower and stocks moved higher.

Earnings season can also drive short-term departures from the traditional stock/bond relationship.  That was the case at the end of the week.  As bond yields fell in response to weaker economic data, stocks were busy surging to all-time highs thanks to strong bank earnings.  Weak data also means the Fed will be that much slower to remove accommodation (via hiking rates or implementing its balance sheet reduction plan), and again, both stocks and bonds like "accommodation." 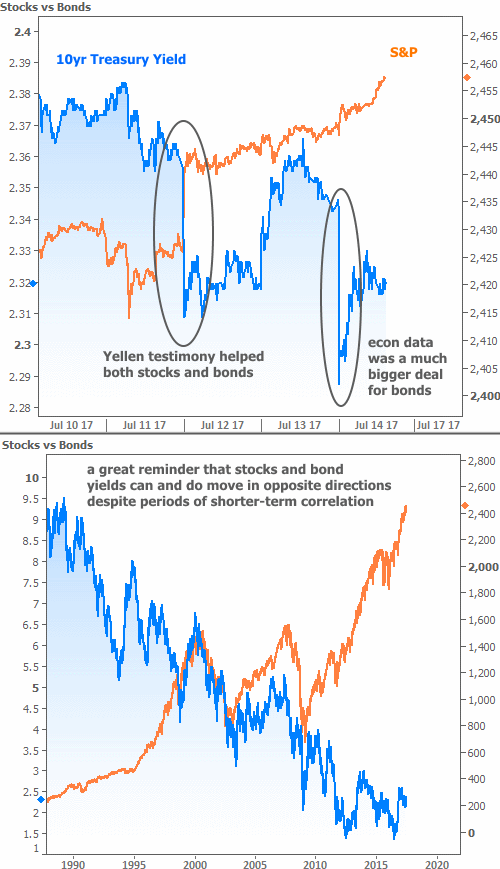 You may have noticed some volatility in the middle of week that didn't get its own caption in the chart above.  That spike in rates came courtesy of the European Central Bank (ECB), which has been a relatively constant threat since late June.  The ECB is increasingly hinting at reducing the pace of its bond buying ("tapering") and the mid-week rate spike followed one of those hints.

The ECB is in a somewhat similar position as the Fed was in 2013.  Those were the days of the "taper tantrum" when rates moved quickly higher as investors accounted for the departure of the biggest, steadiest buyer of bonds (strong bond buying = lower rates).

Fortunately, market participants figure the ECB will be even more slow and cautious when it comes to tapering.  Moreover, European rates will feel it much more than US rates--especially mortgage rates.  Even though we still see European volatility spilling over into US rates markets, this week provided a good example of US rates' ability to outperform.  In the following chart "Germany 10yr Yield" is an interchangeable term for "European rates." 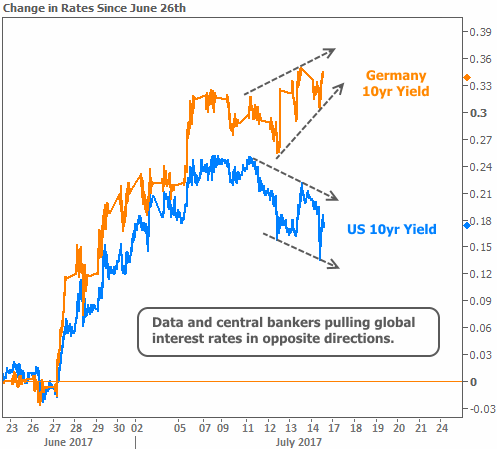 As the chart suggests, various forces are pulling different rates in different directions.  The net effect this week has been for US rates to fall back to more neutral territory in the bigger picture.  In terms of 10yr Treasury yields, the central pivot point for the recent range has been 2.30%, with the next major boundaries 0.12% in either direction.  While rates failed to break convincingly below 2.30%, neither were they pushed above the 2.42% ceiling.

If investors were certain that the stated goals of central bankers would result in significantly higher rates, rates would already be moving significantly higher!  We know the ECB wants to taper.  We know the Fed wants to shrink its reinvestments into bond markets.  We know both would like to hike rates.  What we don't know is how simultaneous tightening of monetary policy at both the Fed and the ECB will affect the global economy.

Is the Fed too eager to hike?  They've admitted part of their rationale is to have "something to cut" the next time the economy takes a turn for the worse.  What kind of message does that send about the current level of stocks and bonds?  Perhaps investors shouldn't be too eager to push rates too high on the chance that coordinated global policy tightening ends up coinciding with an economic downturn.

Even if we're years away from a downturn, some investors have questioned whether the stock market will continue higher in the absence of the Fed and ECB's guaranteed monthly asset purchases.  Would the subsequent drop in stock prices push enough cash into bond markets to keep rates steady or lower?  It's these uncertainties that are keeping rates from quickly jumping on board another taper tantrum bandwagon, and they're not likely to be cleared up soon.

A caveat to the notion of "volatility," is that everything's relative.  Rates may be facing increased volatility in the 2nd half of the year, but only relative to an exceptionally stable first half.