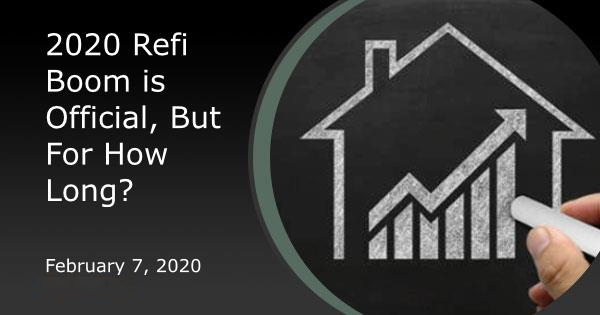 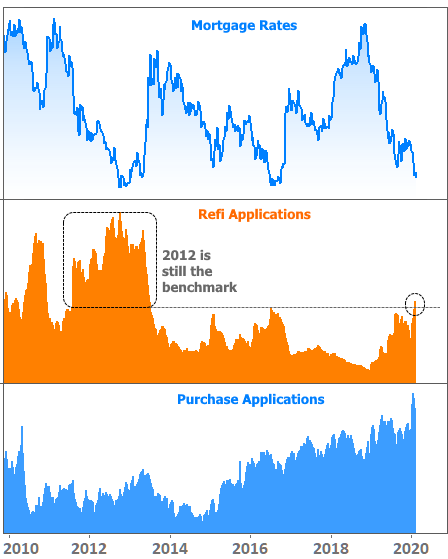 As the chart shows, rates are nearly as low as they were during the last 2 refi booms, but the 2012-2013 version was much bigger.  What's up with that?

That means that all the people who bought homes as the housing market began to recover and all those who'd refinanced during the previous periods of low rates in 2008 and 2010 were "in the money" on a refi.  Contrast that to 2020 where there really hasn't been much refi activity since the 2016 boom.  In other words, the 2020 boom relies upon the purchase market in 2017-2018 as a source of fuel.  Fortunately, that purchase market was the strongest in more than a decade.

2017-2018 also saw the highest rates in nearly a decade.  In fact, anyone who got a mortgage during those two years would save a significant amount of money right now on an equivalent scenario (i.e. same credit score, equity, loan amount, etc). As such, it's no surprise to see refi demand surging.  The special confluence of factors in 2012 means we're not likely to see something like that again unless mortgage rates manage to push well into new all-time lows at some point in the future.

That said, unless rates shoot higher very soon and very quickly, the current refi boom likely isn't done booming.  There's a certain element of awareness involved in refi booms.  Friends talk among themselves.  Mortgage originators work on getting the word out.  Ultimately the ultra-low rates become a fixture in the news.  Once everyone has had time to discover the opportunity and react to it, the boom will start winding down.

So how long will that take?

There's no set formula here, but we can observe past precedent and conclude that our current stint at long-term low rates is not yet at risk of overstaying its welcome.  If we think of average top tier mortgage rates under 3.875% as promoting solid refi demand and rates under 3.5% kicking that demand into higher gear, 2020 still has several months to go before catching up to past refi booms in either metric. 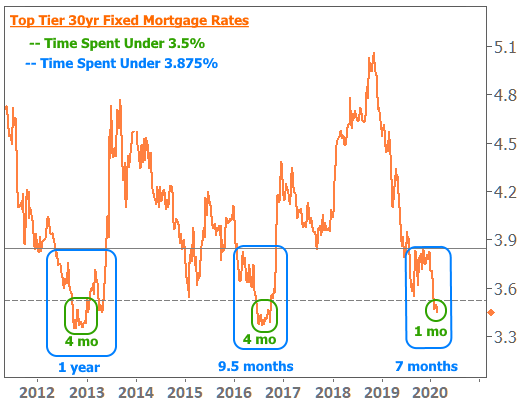 It's important to note, however, there's no rule about the current refi boom lasting as long as past examples.  Any major jump in rates could derail the dream.  For those thinking about refinancing, it makes sense to have a game plan in place and to keep an eye on market movement.

It's also important to note that market movement in stocks can vary quite a bit from the movement in bonds/rates.  Using the 10yr Treasury yield as a benchmark for longer-term rates like mortgages, we see quite a disparity in recent weeks. 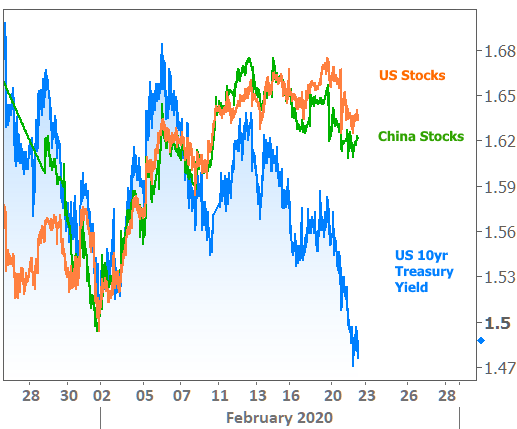 The bond market specializes in making bets about future economic realities even as the stock market reflects shorter-term performance of the biggest companies.  "Shorter-term" in this context means a heavy weight given to present day stats and an outlook that extends not more than a year or two into the future for the average investor (in many cases not more than a day or two into the future!).

Bonds, on the other hand, have an outlook that lines up precisely with their stated duration.  For example, the 10yr Treasury note is accounting for everything it can reasonably foresee up to 10 years from now.  Sure, there is also more weight given to shorter-term concerns, but even then, Treasuries tend to look farther out than stocks.  They also tend to benefit from the hedging of economic bets even as stocks remain on solid footing.  In other words, traders buy bonds to guard against uncertainty.  Excess demand for bonds pushes rates lower.

The hedging of bets is an especially good idea heading into a weekend where there is still plenty of uncertainty surrounding the global coronavirus outbreaks (plural, because there are two of them now).  The past few days have seen a bit of a surge in disconcerting headlines.  It's still not going to be the end of humanity, but it will definitely have an economic impact.  Treasuries (aka "rates") do more than stocks to account for those impacts ahead of time, and a weekend's worth of bad coronavirus news is a big enough risk to hedge bets aggressively.  Combine that with coronavirus being cited as the key reason for exceptionally weak economic data on Friday morning, and it makes good enough sense to be ending the week with the lowest mortgage rates in years.