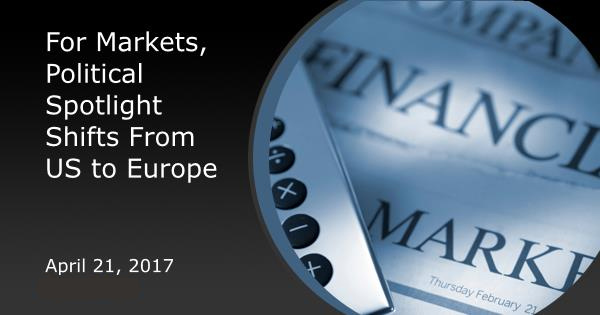 For Markets, Political Spotlight Shifts From US to Europe

In last week's newsletter, we discussed a series of wild cards hitting the table and their impact on financial markets. Specifically, the potential reversal of post-election optimism helped interest rates break below 2017's narrow range. But that was just one small example of much bigger uncertainty. Sooner or later, markets will have to decide what's most important and trade accordingly.

One of the key takeaways from the presidential election was that a Trump administration was more likely to create growth and inflation than a Clinton administration.  That's not necessarily how financial media portrayed the market reaction BEFORE the election, but that's certainly how traders responded AFTER the election.

In other words, rates and stock prices moved higher.  There's no telling whether it was actual optimism for growth and inflation (both bad for rates) or a simply investor excitement over potential tax reform (great for stocks) that did the trick, but clearly, markets are tuned in to the fate of proposed fiscal reforms.

For now, traders are waiting to see if policies can get off the ground.  To that end, rates had second thoughts about continuing deeper into 2017's lows due to the Trump administration's comments on tax reform.  In separate headlines, Secretary Mnuchin said Treasury was hard at work on tax reform and Trump himself said a plan that was bigger than "any tax cut ever" would be unveiled next week.

Despite its lingering importance, fiscal drama has taken a back seat geopolitical concerns.  Last week, this was all about Syria and North Korea.  This week, focus shifted toward Europe.

European markets were closed on Monday.  When trading fired up on Tuesday, there was a quick reaction to headlines suggesting British Prime Minister Theresa May wanted to call an early general election (with the goal of retrenching support for Brexit-related policies).  As far as markets are concerned, Brexit generally equates to lower stocks and rates.  British stocks fell the most, but that weakness spilled over into global stock markets and ultimately provided some benefit for interest rates.

British election surprises quickly gave way to French election expectations.  It's no mystery that France will elect a new president this weekend, and that one of the candidates is the controversial Marine Le Pen.  Much like Brexit, markets view Le Pen as "bad for business."  In the second half of the week, Le Pen fell in polls, prompting a surge in French stocks and European bond yields.  Here too, the move spilled over to US bond markets, pushing rates slightly higher. 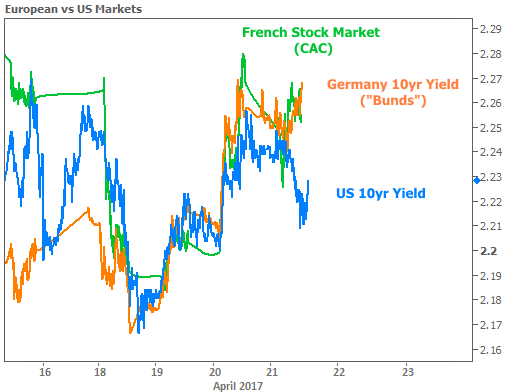 Markets are mostly in position for Le Pen to lose on Sunday.  Even so, the confirmation of that fact would be worth a bit of extra pain for interest rates.  If she wins, the response would be much bigger (and likely positive for rates), but we'll cross those bridges in next week's newsletter.

The state of the economy and the Fed's subsequent policy response to economic conditions remains an ongoing wild card.  Does the Fed really believe growth and inflation might necessitate tighter monetary policy or are they simply tightening now so they can loosen policy when the economy begins to lose steam?  Interestingly enough, Fed members have answered "yes" to both those questions recently.

This week didn't tell us much about new evolutions in the Fed's thought process.  And we only saw limited instances of new economic data.  But the data that came out was generally positive for the housing market.

The National Association of Realtors' Existing Home Sales report inched up to its best levels since 2007, continuing a trend that's easy to see in the top of the following chart.  Government data on new construction was a mixed bag with Housing Starts falling a bit short while Building Permits advanced.  Both remain in a solid upward trend.  Homebuilder Sentiment was the only major housing report that declined (note: it covers April while the other two covered March).  Despite the decline, the bigger-picture trend remains arguably positive, as seen at the bottom of the chart. 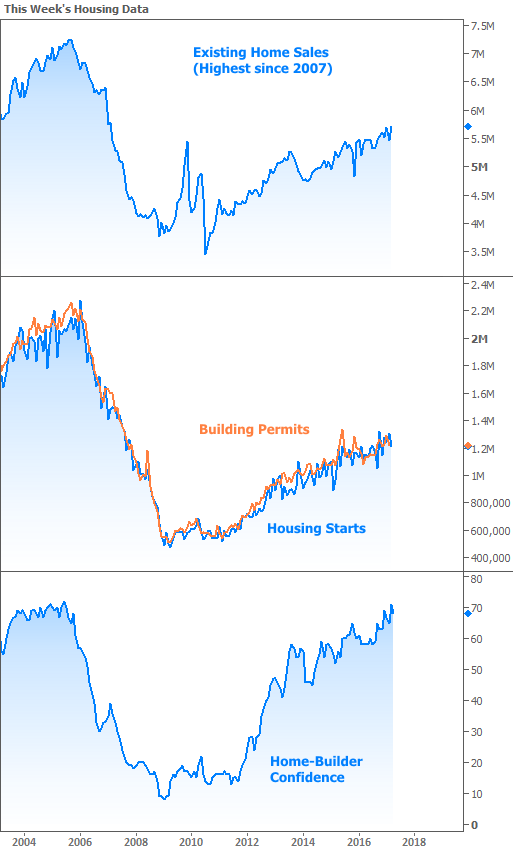