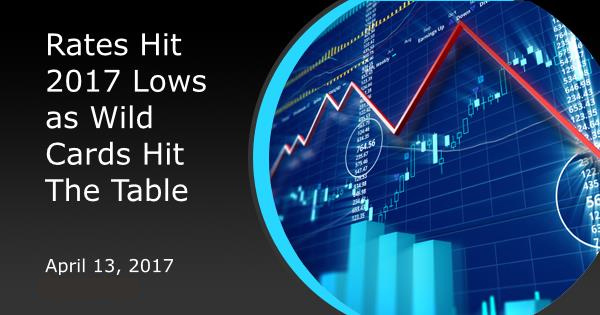 After spending nearly 6 months in the same narrow range, interest rates finally made a move LOWER this week, much to the chagrin of the prevailing narrative calling for "higher rates in 2017."  At the same time, stock prices have been in their most persistent downtrend since the election.  All this has investors wondering if the "Trump trade" is beginning to unravel.

When Trump won the election in November, investors quickly adjusted strategies based on several assumptions about the future of monetary and fiscal policy.  The general expectations were for more growth and inflation.

Combined with specific expectations for tax reform, the Trump trade was clear: buy stocks and sell bonds (which pushes rates higher).  And that's exactly what happened after the election.  Moreover, pundit after pundit proclaimed the death of the decades-long trend toward lower rates.  This is how that trend looks in terms of 10yr Treasury yields--the quintessential benchmark for longer-term rates (like mortgages): 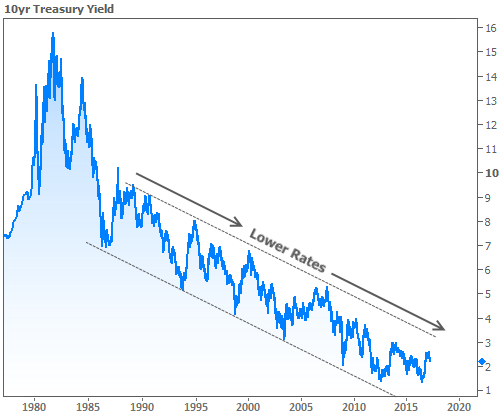 Late 2016 certainly wasn't the first time that experts proclaimed the death of this trend.  In fact, such predictions were common following the Great Recession.  Market-watchers who were too young to remember 10yr yields in the 2's in the 1950's figured that rates "should be" higher simply because they'd seen 16% rates during their lifetimes and were suddenly getting close to (and then breaking below) 2%.

Paradigm shifts are tough.  Most "experts" weren't prepared for the profound effects of the monetary policy response to the crisis.  Central banks chose to buy bonds and furthermore promised to buy a certain amount.  It only made sense for investors to get their hands on bonds at any price, considering the Fed (and then, the European Central Bank) were guaranteed buyers.

In 2013, when the Fed announced it would soon be buying fewer bonds, many market-watchers saw this as the beginning of the end for the long-term trend toward lower rates.  They had a better case this time, but it wasn't long before the European Central Bank (ECB) managed to enact its own full-fledged bond buying program.

Combined with the Fed's policy of reinvesting proceeds from its balance sheet back into bond markets, the proverbial punch bowl of cheap money kept the rate rally alive.  10yr yields ultimately hit all-time lows in mid-2016.

Every time rates make a new long-term low, investors wonder "was that it?  Was that the turning point in the long-term rally?"  They saw late-2016 developments as a resounding "yes!"  In addition to central banks increasingly threatening to pull away their various punch bowls, a Trump presidency brought the promise of fiscal reforms that had the potential to push stocks, growth, and inflation higher.  Finally, this HAD to be the turning point!

Markets acted the part, at first.  Stocks, specifically had been acting the part all the way through the beginning of March.  Since then--and especially this week--the durability of the Trump trade is indeed being called into question.  Failure of the healthcare bill to sail through Congress raised doubts about the timeliness and efficacy of much-anticipated tax reform.  Along with the most recent Fed rate hike forecasts, these fiscal hurdles are largely responsible for the move lower in stocks and rates over the past month.

Just this week, geopolitical concerns (which tend to help rates and hurt stocks) have been added to the mix with several potentially alarming headlines.  In a very short time, the US has bombed Syria, been threatened with nuclear weapons by North Korea, dropped the biggest available non-nuke in Afghanistan (some speculate as a show of force), sent an "armada" of warships to East China Sea (an overt show of force), and expressed that relations with Russia are at an all time low.

While all of the above was undoubtedly a boon for bond markets, it wasn't until Trump commented on the US Dollar being "too strong" that rates finally jumped out of the 2017 trend with both feet.  (Policy decisions that would weaken the dollar would also tend to push rates lower.) 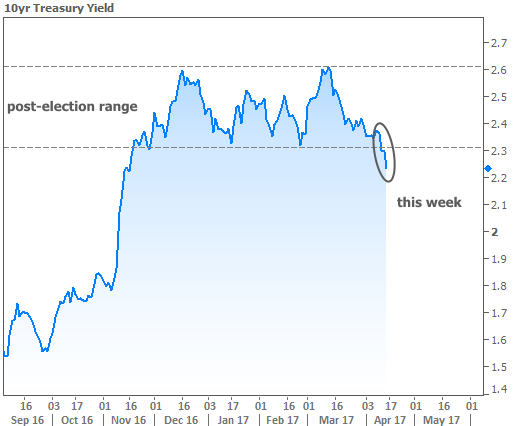 Here's the bottom line: when experts proclaimed the death of the long-term low rate trend in late 2016, the only major counterpoints to that idea were the possibilities that Trump would have a hard time getting his campaign goals/promises to translate into policy, and that Trump's leadership style might create geopolitical risks that ended up helping bonds. Some optimists also figured Trump the financier would speak out (and act out) in favor of specific market metrics like lower rates or a weaker dollar.

Now, in the space of only a few weeks, all of those wild cards have been placed on the table.  The market reaction in the chart above is merely a visual representation of the risks presented by those wild cards.  Suddenly, even the "experts" are admitting it's anyone's game (again) when it comes to long-term rate momentum.

To whatever extent rates can continue lower, it's particularly exciting for the mortgage and housing market.  Purchase applications are already in great shape and as the Dec 2 Newsletter predicted, refi demand has held near its historical floor (as opposed to being "crushed," as some of the more panicked perspectives suggested).  Both purchases and refis are in a position to capitalize in the event of a bigger move back toward pre-election rates. 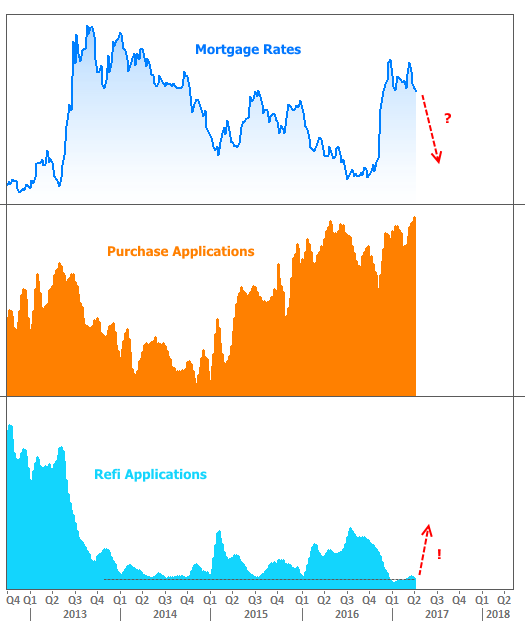