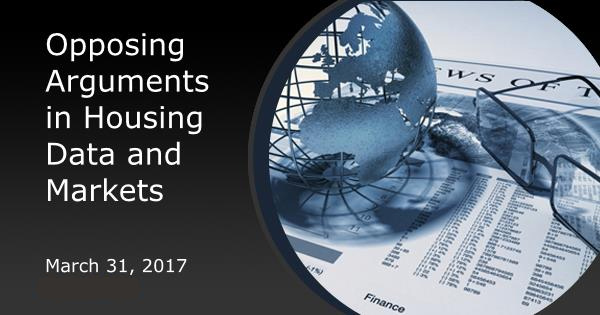 Over the past few weeks, downbeat, cautionary housing market data has been increasingly prevalent. During that time, rates had generally moved lower. But those trends shifted this week--in some cases, abruptly.

Let's look at rates first.  The most recent move lower began after the March 15th Fed Announcement.  The Fed hiked rates, but the outlook for future rate hikes didn't accelerate as much as investors expected.  Investors had "priced-in" the accelerated outlook by trading rates higher ahead of the Fed, and were thus able to trade rates lower when the Fed's stance became clear.

In other words, the Fed's overall message was slightly more accommodative than markets thought it would be.  Stocks like an accommodative Fed just as much as bonds (aka "rates"), so it was no surprise to see stocks gain some ground at the same time that rates were falling.

But just a few hours into the domestic trading session, updates from members of the House began hitting the wires.  Then, Speaker Ryan held a press conference saying lawmakers remained committed to passing healthcare legislation and to "getting it right."

As far as financial markets were concerned, this was better than the absence of information over the weekend. To whatever extent fiscal reforms look viable, the higher rates and stock prices that followed the election are relatively more justified.  Thus the first "opposing argument" to last week's lower rates/stocks was heard.  Markets reacted accordingly although stocks recaptured more lost ground than rates. 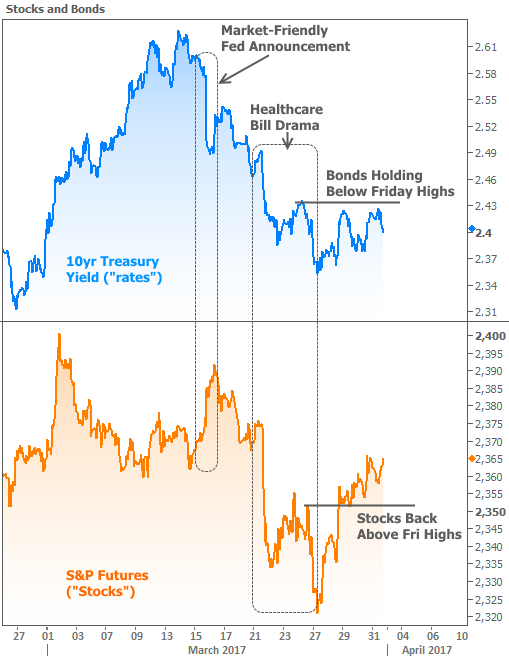 In addition to the healthcare updates, financial media has given a fair amount of attention to a rebound in oil prices.  While this does indeed correlate fairly well with movement in stocks and bonds over the short term, there's no question that all three indicators are more than willing to go their separate ways over longer timeframes. 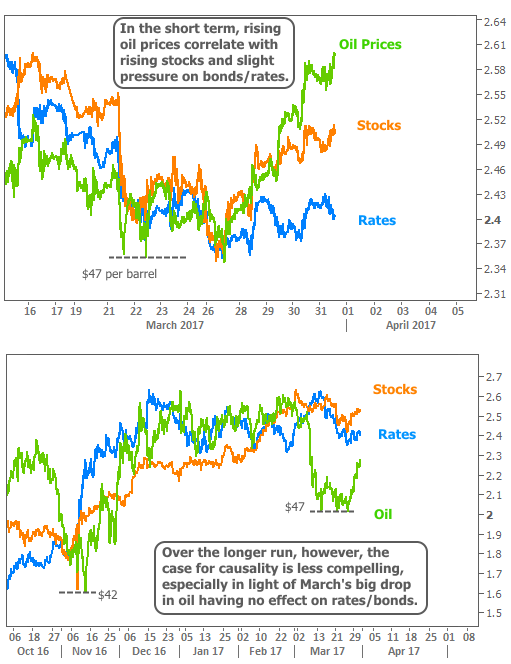 In terms of housing-related data, this week's "opposing arguments" came in the form of strong sales numbers and price gains.  Whereas several HPIs (home price indices) have noticeably begun to decelerate, this week's Case Shiller data (for the month of January) showed the strongest price gains in more than 2 years.

One of the most important home sales metrics was similarly upbeat.  In fact, the National Association of Realtors' Pending Home Sales Index soared to its second highest level in nearly 11 years.  February hit an index level of 112.3.  Apart from last April's 113.6, you'd have to go all the way back to May 2006 to find anything higher.  As always, when looking at charts of home sales data, keep in mind that the homebuyer tax credits distorted the true level of demand in 2009-10. 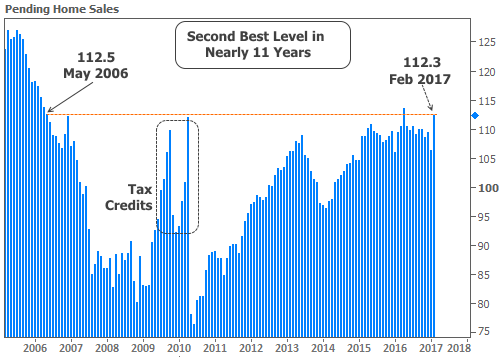 Next week brings several important economic reports, including the Employment Situation (the big "jobs report") on Friday.  But the focal point for volatility may end up being Wednesday's release of the Minutes from the last Fed meeting.  This will be the first time that markets get to see the Fed's recently-announced "fan charts."  These charts are part of the Fed's forecasts (which are responsible for the move toward lower rates starting March 15th) and will provide a more detailed picture of the Fed's expectations.