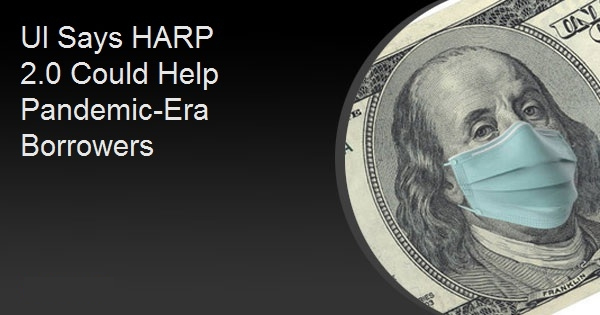 The Urban Institute (UI) is advocating for a streamlined refinancing program similar to the Home Affordable Refinance Program (HARP) which aided many homeowners during the Great Recession to assist those impacted by the pandemic. HARP, which was used by more than 3.4 million borrowers between 2009 and 2018, offered simplified documentation, automated appraisals, no or reduced loan-level pricing adjustments, and mortgage insurance transferability to existing GSE (Fannie Mae and Freddie Mac) borrowers. Because home prices had dropped dramatically, leaving many borrowers underwater, eligibility was determined without regard to a mortgage's current loan-to-value (LTV) ratio.

UI analysts Laurie Goodman and Edward Golding write that studies have estimated that HARP, by lowering monthly mortgage payments, reduced default rates on those mortgages by as much as 62 percent. They note that, while policymakers acted quickly to enact forbearance and foreclosure moratoria as COVID-19 took hold, there has been no effort to restart HARP or initiate a similar program.

In the current low interest rate environment, those borrowers who have taken advantage of refinancing have tended to have high credit scores and large loans and were not among those who lost jobs or suffered income reduction during the pandemic. Those households who were most seriously affected are likely to have been locked out of refinancing opportunities, and those borrowers are disproportionately Black and Latino.

Even though most homeowners already have a mortgage, and a lower rate would make those loans less risky, credit was tightening before the pandemic and has tightened even more since, particularly for refinancing. UI research shows that, in January 2019, 29.3 percent of Fannie Mae's loans for refinancing had credit scores under 700. That share dropped to 14.8 percent a year later, and to 9.4 percent by January 2021. Where there was layered risk - i.e., a high debt-to-income (DTI) ratio or LTV ratio on top of the lower score, the tightening was even more dramatic - from 13.6 percent in January 2019 to 3.2 percent in January of this year.

Consequently, among Fannie Mae loans originated in 2018, 51 percent of borrowers with credit scores below 680 remain in those loans compared with 31 percent of those with credit scores of at least 760. As borrowers with low scores are already more likely to default than those with higher scores, a streamlined refinancing program that lowered mortgage payments would disproportionately benefit these borrowers and reduce their likelihood of default.

Data gathered through the Home Mortgage Disclosure Act data show that at origination, differences in mortgage rates by race and ethnicity are small and can be partially explained by differences in credit characteristics, but the differences among outstanding loans are larger, indicating that Black and Latino borrowers have more difficulty in refinancing. The authors say they have focused on credit scores because the data are available, but issues related to loss of income are probably also affecting refinancing.

By reducing monthly payments, a HARP-like program would have multiple benefits. It could stimulate economic activity as borrowers in weak financial positions are likely to use those savings for immediate consumption. For those who have been most impacted by the pandemic, those savings could help them meet basic needs and at only a small cost to the GSEs while reducing the default risk on loans they already insure. The GSEs have sold off much of this risk through credit-risk transfer programs so they would be forced to take the risk back on their own balance sheet or include them in new pools at less favorable terms. Still, the actual costs would be small given the high rate of recent home price appreciation. The GSEs can also price for these streamlined programs when setting their guarantee fees.

Goodman and Goldman conclude that, by introducing a streamlined refinance program modeled after HARP, policymakers could address refinancing barriers and help borrowers with low credit scores, low incomes, and small loans, who are disproportionately Black and Latino, strengthen their financial situation and avoid their defaulting on their home loans. This should be done while rates are still low enough to make the program effective.