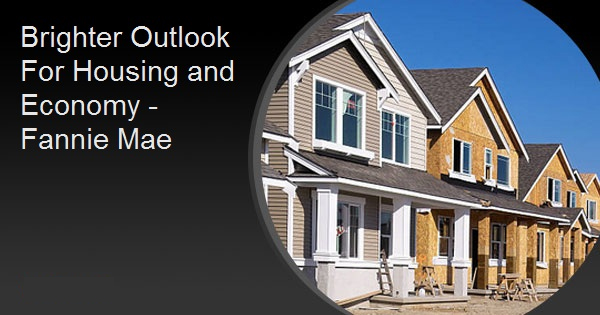 ncoming data for March has caused Fannie Mae to again revise its forecast for the year's growth in gross domestic product (GDP). The company's Economic and Strategic Research (ESR) team said a sharp uptick in the economy last month followed a weather-related retreat in February.

Most evident was a jump in employment to 916,000 new jobs in March from 468,000 in February, the fastest pace since August 2020. This growth is expected to continue. Auto sales were also up, and consumer confidence surveys jumped to their highest levels since the April 2020 downturn. As a result of these and other heightened indicators, Fannie Mae now sees growth reaching 6.8 percent by the fourth quarter on a year-over-year basis, up from 6.6 percent in the earlier forecast. Expectations for 2022 are unchanged at 3.0 percent.

They attribute the growth spurt to waning COVID-19 restrictions as vaccinations have increased and to higher household incomes because of stimulus payments which were paid out earlier than anticipated. There is still uncertainty "over the speed and duration of the current leg of the recovery," they say, but they do expect brisk acceleration and second quarter growth at an annualized 9.1 percent.

The uncertainty is rooted in several unknowns. It is unclear how eager consumers will be to return to previously restricted activities as is their willingness to tap into the near $2 trillion they have saved over the past year. Other downside risks include ongoing disruptions to the supply chain, most notably semiconductors (and related auto manufacturing) and shipping bottlenecks. If these problems intensify, they will likely hold back growth. There is also uncertainty over inflation and, if  it begins to rise too fast, how the Fed will react. The implications of any tightening of monetary policy and any future infrastructure and tax legislation have not beeen incorporated into the forecast. Lastly, COVID variants that resist current vaccines, or further complications regarding the vaccination roll out, cannot be ruled out. Monthly changes in inflation will take on greater importance as more economic activities reopen. Prices of many commodities and materials rose swiftly over the past year, but they were offset by soft or even declining prices in other areas. Rents and healthcare prices began to turn upward in recent months, and as pandemic restrictions diminish, there may be new pricing pressure in previously depressed sectors. Core CPI, which excludes volatile energy and food prices, rose 0.3 percent in March on a month-over-month basis. The payroll quits rate recovered back to pre-COVID levels in February, suggesting many workers feel sufficiently confident to look for other work so employers may begin to face wage pressures sooner than expected.

"The ramp-up we'd previously forecast for the economy is underway, as evidenced by, among other measures, increasing airline passenger reservations and restaurant bookings," said Doug Duncan, Senior Vice President and Chief Economist. "Vaccinations are continuing to roll out, and consumers appear to be increasingly looking toward post-pandemic life. While inflationary pressure is growing, our latest forecast update suggests that in the near term interest rates will remain steady at borrower-friendly levels. In fact, despite the recent increases, mortgage rates remain near historical lows, which we expect will help maintain strong housing demand in 2021.

Duncan added: "An above-average pace of renters converting to first-time homebuyers is continuing, with many migrating into the suburbs from denser urban areas. However, strong consumer demand for housing continues to hit up against a lack of supply, limiting sales and bolstering home prices, which we expect will further compound affordability concerns in the months ahead as homebuilders also wrestle with input supply restraints."

The economists revised their forecast for sales of existing homes down while modestly raising expectations for new home sales. Total sales are predicted to be 6.2 percent higher than in 2020. The home price forecast was raised to 8.0 percent in 2021 from 4.2 percent followed by a deceleration to 2.9 percent in 2022 from the previous 2.5 percent. The  higher house price outlook more than offsets the modestly higher interest rate forecast, resulting in an upward  revision of single-family mortgage originations in 2021 and 2022 to $4.0 trillion and $3.0 trillion, up from $3.9 trillion and $2.9 trillion, respectively.

The housing outlook also presents risks. The ESR group believes the majority of marginal home purchase demand added since last year's delayed homebuying season waned was driven by households accelerating their plans to move. Thus, some of the surge in sales will begin to wane in 2021. However, if people continue to reassess their housing arrangements, the higher level of sales might last longer. There is additional uncertainty about the timing and implications of the end of the forbearance policies and how those might impact the number and nature of home sales, but continued improvement in the labor market and higher levels of home equity will likely help limit distressed sales.

Purchase mortgage applications rebounded after the February partly weather-related pull back. Analysis of mortgage-backed security (MBS) data showed that about 550,000 additional homes were purchased in 2020 by first-time homebuyers using an agency-backed mortgage compared to the pace of recent years. Fannie Mae's report on homebuyer migration from its Desktop Underwriter shows these additional home purchases were disproportionately driven by renters moving out of dense urban areas, something which has continued into the current year. It appears that much of this demand was pulled forward in time, reflecting renters who were already planning to purchase a home doing so earlier than expected due to work-from-home options, and lower mortgage rates.

Strong price gains will continue to support new construction so near-term expectations for single-family housing starts have been raised 23.8 percent from 2020 to 1.23 million units, the highest level since 2006. If not for the supply constraints such as the high price of lumber and other construction materials that builders are also facing, Fannie Mae says it would expect the pace of starts to be even stronger.

Consistent with a stronger home price growth forecast, the outlook for purchase mortgage originations has been boosted by $66 billion for 2021 and $84 billion for 2022 to $1.9 trillion each year compared to the March forecast. Refinance volume is unchanged at $2.1 trillion for this year and will decline 48 percent next year to $1.1 trillion, a $40 billion downward revision from the previous forecast. Around 42 percent of all outstanding mortgages have at least a 50-basis point incentive to refinance at current rates, which is down from nearly 70 percent at the end of 2020.