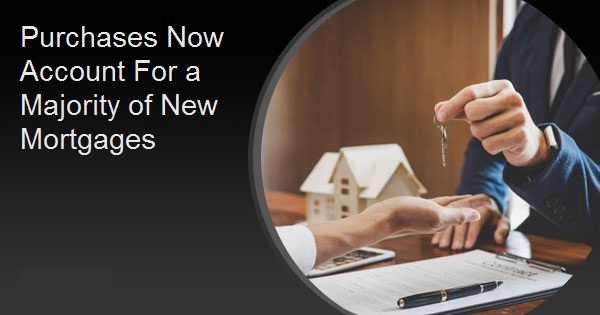 Purchases Now Account For a Majority of New Mortgages

The initial report covers activity for March and shows that at month's end the average 30-year conforming rate had increased by nearly 60 basis points over the course of the month to 3.34 percent. Still, this was 20 basis points below the rate at the same point in 2020. Average rates by loan product are shown below. "Recent - and sharp - upward movements in interest rates have shifted the mortgage originations landscape very quickly," said Black Knight Secondary Marketing Technologies President Scott Happ. "The wave of refinance activity of the last year and some months has suddenly given way to a purchase-heavy mix. The implications of this shift touch nearly every area of mortgage lending, which in turn has implications for the wider economy."

Overall rate locks were up 2.5 percent for the month of March. However, there was wide diversion among the types of loans. The index measuring purchase locks rose 31.9 percent to 200 while cash-out refinances rose 4.1 percent and rate-term finances declined 26.4 percent month-over-month to 66 and 116 index readings and are down more than 35 percent since the end of 2020. Over 67 percent of rate locks were for conforming loans with most of the remaining relatively evenly distributed among non-conforming loans, and those backed by FHA and the VA. USDA loans had a 1 percent share. Happ, citing the interest rate increases, said, "It's little wonder that rate/term refinance activity would be down in March. The decline in rate/term lending has shifted the originations market mix to 52 percent purchase and 48 percent refi. This marks the first time - but almost certainly not the last - that purchase loans have made up a majority share of monthly mortgage lending since December 2019. We also saw credit scores pull back, a trend that's likely to continue among refis as high-credit borrowers, who have been largely driving record volumes, exit the market." Pull-through rates, the percentage of applications for mortgages that result in closed loans, is close to 80 percent for both refinancing and purchases. The rate, however, has dropped for purchase loans since the first of the year.

The report notes that lenders typically see greater yields when they sell loans via mandatory delivery than via best efforts. The later, however, carries less risk. The chart below shows the spread between the two alternatives.