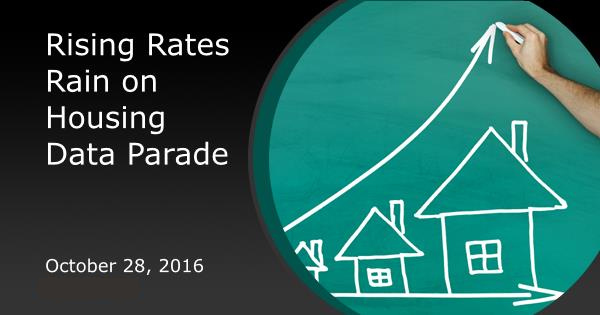 By no means has the housing market snapped back from the financial crisis with any sort of gusto.  It's been a slow, steady slog in the right direction, with only occasional flashes of glory.

There were no such flashes in this week's housing data, but it was reasonably strong nonetheless.  New Home Sales (which only measure newly-built homes) maintained a gentle upward trend in the bigger picture, despite a revision of last month's stellar reading, bringing it back in line with recent averages. 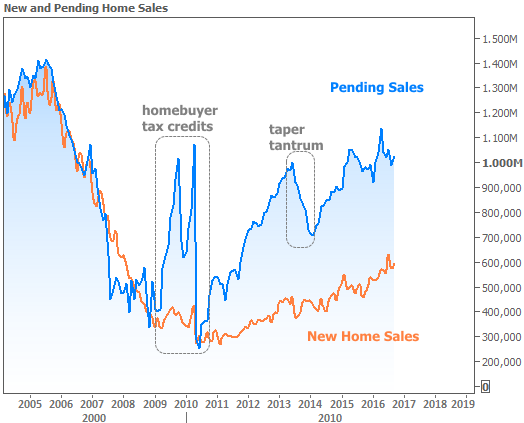 Tight inventory is often cited as a major driver of home price growth.  Separate reports from Case Shiller and FHFA confirm the upward trend in prices.  Case-Shiller pegs the annual rate of appreciation at 5.3% in its broader 20-city index, while the FHFA reports a loftier 6.4%.

Inventory conditions can't take all the credit for price gains.  Naturally, the interest rate environment is a consideration.  Many prospective homebuyers decide how much they can afford based on monthly payment, and this week's calculations will differ from last week's!

In other words, rates are higher.  Relative to the narrower rate ranges seen in July and August, rates have been sharply higher over the past 2 months and are now reaching levels not seen since late May 2016.

Of course, on an outright basis, there's nothing too troubling about 30yr fixed mortgage rates in the upper-middle 3% range.  If rates continue on their current path, however, it could quickly take the wind out of the housing market's sails, as can be seen in the "taper tantrum" section of the first chart.

A potential European version of the taper tantrum continues to be a hot topic and a key motivation for recently higher rates.  The European Central Bank (ECB) confirmed it will address any potential changes to its current bond-buying program in early December.  The 2013 taper tantrum began under similar circumstances in the US.

Granted, a European taper tantrum would have a less direct effect on rates in the US, but it would definitely have an effect.  The correlation is readily apparent in the following chart of European vs US 10yr yields (the best proxy for trends in longer-term rates, like mortgages).

The chart includes the UK 10yr yield in addition to the European benchmark Germany ("benchmark" is like a "spokesperson" for a broader group.  Germany is the biggest economy in the EU, so its bonds are the benchmark). 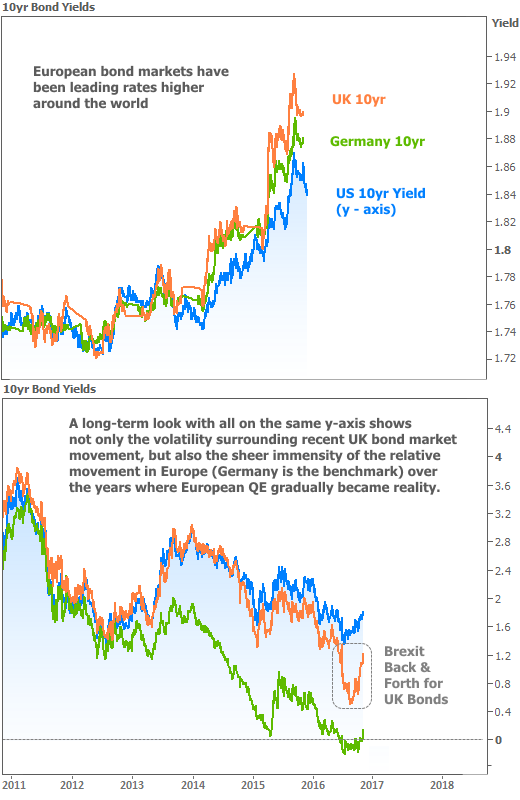 Volatile ebbs and flows surrounding Brexit have played an outsized role in the recent upward pressure on rates.  In general, market participants bought bonds aggressively at the peak of Brexit panic (bond buying = lower rates), and have recently begun selling bonds quickly as the British sky doesn't seem to be falling (bond selling = higher rates).  Just this week, a stronger-than-expected reading on Q3 GDP in the UK kicked the bond selling into high gear.

But the bigger threat remains the European taper tantrum.  A stronger Britain only helps the case for Europe to pull back on bond purchases.  Between now and December, rate volatility will only be limited to consistency of Europe's (and the UK's) economic data.  The stronger and stabler the data is, the better the case becomes for European tapering.

Because this isn't our first tapering rodeo, the shock won't be as abrupt as it was in 2013 (if it happens), but it will result in higher rates regardless.  Conversely, if Europe doubles down on its bond buying commitments, rates would likely catch a break, and erase a decent amount of recent losses.