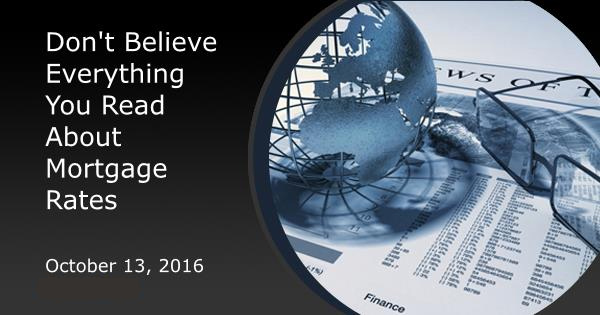 Don't Believe Everything You Read About Mortgage Rates

Every Thursday, Freddie Mac releases its weekly mortgage rate survey. It's subsequently used as an authoritative primary source for most major media outlets. That's not usually a problem, but this week could be an exception.

First thing's first: over time, Freddie's weekly rate survey (officially, the "Primary Mortgage Market Survey") is incredibly accurate.  For broad, analytical purposes, it does a perfect job of conveying bigger-picture mortgage rate movement.  That's great for market analysts who are studying long-term trends, but the data runs the risk of being stale if you have timely needs.

Unfortunately, markets have been anything but calm for the past few weeks, causing Freddie's numbers to lag interest rate reality.  The problem is compounded by the fact that Freddie's survey responses only come in during the first 3 days of the week (Thursday and Friday are never counted).

Last Thursday, Freddie reported rates as "unchanged," whereas actual rates rose at their fastest weekly pace since November 2015!  As such, we would be justified in expecting a sharp increase in this week's Freddie survey.  Instead, it rose by a modest 0.05%!  That's only about a quarter of the actual move from the recent lows.

While the smaller-than-expected increase in Freddie's survey numbers is likely a byproduct of the 3-day weekend, that's of little help to consumers who are seeing one thing in the news and then being told another by their mortgage professional.  Rest-assured, as of Wednesday, rates were the highest they've been in more than 4 months. 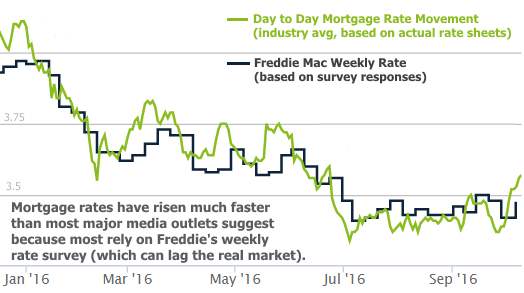 The motivations for the most recent rate spike are diverse and potentially even debatable.  There are 2 distinct camps though.  One camp sees rates moving higher as a result of Fed rate hike expectations.  The other focuses more on global central bank stimulus expectations (last week's newsletter discussed this in detail).  The truth is probably somewhere in between these two camps, and the following chart supports that conclusion. 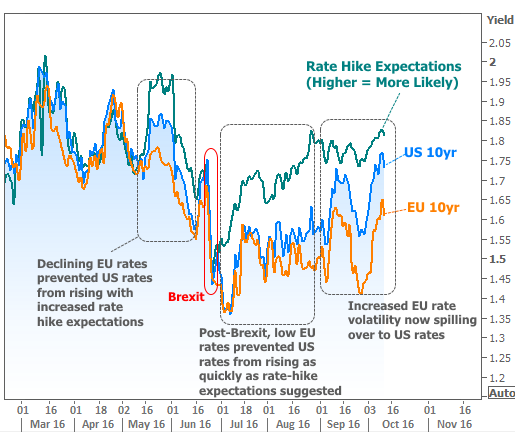 In the chart, the higher the green line, the more markets are expecting a Fed rate hike.  Notice the strong correlation between US rates, EU rates, and rate hike expectations earlier in the year.  Fed rate hike rhetoric strengthened in May, causing expectations to spike, but longer term rates (like 10yr Treasuries and mortgage rates) didn't follow because global markets were already buzzing about Brexit (the UK's vote to leave the European Union).

Post-Brexit, US rates have been less willing to chase the bounce in Fed rate hike expectations, despite clearly feeling some pressure (as seen in July/Aug, when the blue line inched higher relative to the orange line).  Once European rate volatility increased, US rates have had freer rein to follow domestic motivations.  This trend toward higher rates can continue if European rates keep moving gradually higher, but that's a big "if."

Bottom line: the Fed isn't the only source of inspiration for rate movement right now.  The next few months bring significant risks to the outlook.  These include 2 opportunities for the Fed to hike rates and a high likelihood of the European Central Bank specifically addressing its asset purchase plans (the original source of the current rate spike).