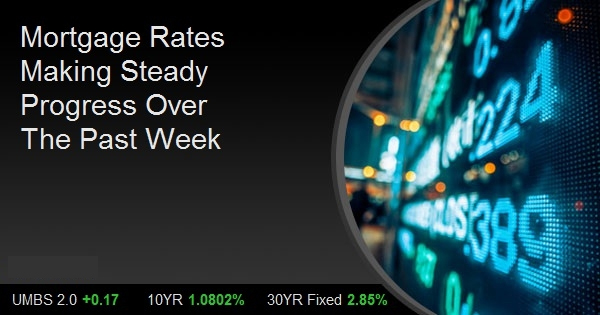 Mortgage Rates Making Steady Progress Over The Past Week

Mortgage rates are off to a decent start this week with the average lender offering slightly better terms compared to last Friday.  The progress actually began earlier last week.  On Tuesday morning, rates were at their highest levels in exactly 2 months after jumping at a relatively quick pace in response to the Georgia senate election.  The underlying bond market was making an adjustment for a likely increase in Treasury issuance in the short term.

There was no way to be sure how long that adjustment would last or how much it would impact rates.  That uncertainty began to clear up on Tuesday as a scheduled auction of US Treasury debt was met with strong demand.  After that, the tone in the bond market shifted for the better and we've seen additional examples of resilience.

In general, when bonds are "resilient" (or "stronger," or when they can be described with any other superlative), it means that rates are holding steady or dropping.  That said, keep in mind that resilience doesn't necessarily connote the promise of another significant drop in rates.  For that, we'd need to see an unexpected deterioration in pandemic numbers, economic data, or the prospects for another round of fiscal stimulus.

As it stands, the average lender raised rates by roughly a quarter of a point versus January 5th and they have since come back down by about an eighth.  That means top tier conventional 30yr fixed scenarios are still seeing quotes in the high 2% range.