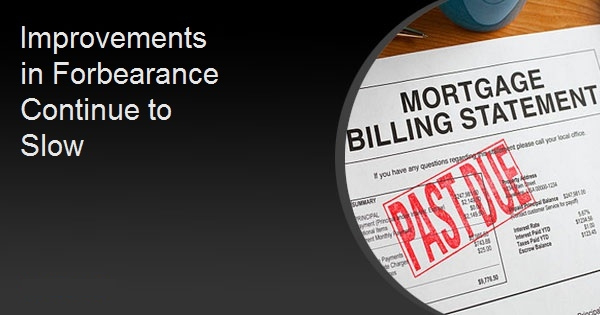 Improvements in Forbearance Continue to Slow

A decline in the number of forborne loans in those portfolios serviced for banks and private label securities (PLS) accounted for most of the modest downturn in overall numbers last week. Black Knight said the number of active plans dropped by 9,000 loans or 0.3 percent compared to the previous week. The the total of active plans is only 1.5 percent below where it was in December, continuing a recent trend of slowing improvement. "This further sets the stage for a great many plans to still be active when the first wave of forbearance plans begin to expire at the end of March, the Black Knight report says."

Loans serviced for bank portfolios and private label securities (PLS) declined by 13,000 loans. This was partially offset by a 4,000-loan rise in FHA and VA loans. The number of forbearances in Fannie Mae and Freddie Mac's portfolios held steady week-over-week.

The number of new forbearance plans rose, rose by 10,000 from the previous week but were lower than the weekly average of 32,000 seen before the holidays. Many of these loans were restarts.  Approximately 370,000 active plans are slated to be reviewed for extension/removal by the end of January.

As of January 12, Black Knight estimates that 2.63 million or 5.1 percent of the 53 million active mortgages nationwide are in forbearance plans. Those loans represent $545 billion in unpaid principal. About 15 percent of homeowners in plans are current on their mortgage payments and 83 percent of the plans have been extended at some point since the program started in March.

Advances to investors and for payment of taxes and insurance have dropped significantly since mid-May when the total monthly commitment of principal and interest was estimated at $8.5 billion and $2.8 billion for payments out of escrow. The monthly aggregate is now $3.3 billion, almost evenly distributed across the three investor categories. Required payments of insurance and tax bills on forborne loans are now estimated at $1.2 billion, $0.4 billion for each loan type.