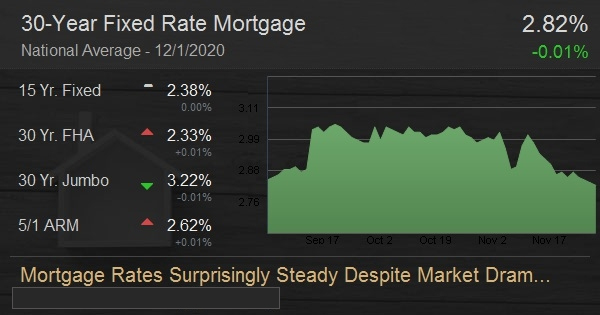 Like many industries, housing finance has a superficial layer that's fairly easy to understand for the average consumer.  A person wants a home.  They don't want to pay cash.  They get a loan.  Lower rates = lower payments.  The end.

Anyone can observe this objective fact by jumping just a bit deeper into the rabbit hole and acquainting themselves with MBS (mortgage-backed securities).  These are the true raw ingredients for mortgage rates even though they frequently mimic 10yr Treasury yield movement.

By the time someone has reached this level of understanding, there's not much left to do when it comes to keeping an eye on mortgage rates.  People who know about and track MBS have truly arrived!  They're the coolest mortgage rate watchers you know!

But wouldn't you know it, they have some head-scratching to do in 2020, and especially today.  MBS got demolished today.  Normally when that happens, you can bet that mortgage rates will be noticeably higher.  Today, however, they're not.

The answer is both simple and complex.  The simple part is that mortgage rates have been increasingly beholden to mortgage lenders' ability to close the loans coming in the door in a timely enough manner.  Lenders who get too busy have to raise rates to stem the tide.  Lenders with excess capacity move to offer better rates than their competitors until their pipelines are once again brimming.

All that having been said, MBS movements like today's would still typically be enough for rates to rise.  In fact, many lenders did increase rates in the middle of the day today in direct response to MBS.  The catch is that their initial rates were lower than yesterday's.  Thus, the net change versus yesterday is essentially "none" for the average lender, or at the very least, FAR less than anyone who knows about MBS would ever expect.

For the average lender, this means 30yr fixed rates that continue to operate very close to all-time lows.  Purchase rates are in the 2.5-2.625% range and refi rates, 2.75-2.875%.  These are averages for best-case scenarios and top tier credit (740+ fico, owner occupied, single family home, primary residence, at least 20% equity or downpayment, conventional conforming Fannie/Freddie approval).  Some lenders are significantly better.  Few are much worse, but they're out there.