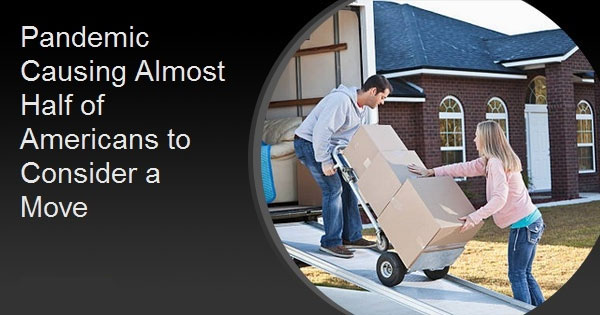 Pandemic Causing Almost Half of Americans to Consider a Move

A recent survey by Lending Tree found that nearly half of Americans are thinking about moving in the not-to-distant future and it appears that the COVID-19 pandemic may be at least part of their motivation. Crissinda Ponder writes that the health crisis has affected nearly every aspect of daily life, and with 11 million Americans unemployed, residents make an exodus from major cities, a desire for more living space. There is no reason to think that housing choices would be any less affected.

The Lending Tree survey covered 2,000 consumers and 46 percent said they were thinking about relocating within the next year. Twenty-seven percent are considering a new home in their current area, with a primary motivation of reducing their living expenses. Another 12 percent would consider a nearby city, while 8 percent would like to move to a new state.

Reducing living expenses was cited by 44 percent of all respondents. Other reasons frequently given were:

Renters also frequently said they didn't like the way their property was being managed.

Homeowners were less likely than renters to be considering a move, 39 percent versus 56 percent and the wanderlust is also more pronounced among those who work remotely, with nearly two-thirds considering a move compared to only 31 percent of commuters.  Ponder said remote work is unlocking a different type of demand for both homebuyers and renters who wish to move, which is highlighted in a related, breakout survey of remote workers conducted by LendingTree. That survey found that 47 percent of Americans were working from home and about a quarter of those were thinking about relocating locally, largely because they needed different features such as a home office.

The pandemic has changed the living situation of 38 percent of respondents, most commonly forcing them to move in with family or friends or having family or friends coming to live with them. Buying a new home or finding a less expensive rental were also among the top changes. More than half (52 percent) of Gen Xers report their living situation has changed because of the pandemic. That's compared with 49 percent of millennials and just 10 percent of baby boomers. The survey found that about two-thirds of respondents were now thinking about different home amenities they hadn't considered earlier, such as a yard in which they could spend more time outdoors (27 percent), a larger kitchen (18 percent), or the aforementioned office space (16 percent). The economic crisis has adversely affected the finances of many Americans," said Tendayi Kapfidze, LendingTree's chief economist. "Even those who have kept their jobs and added to savings, via stimulus and spending less due to staying home, are likely worried about the stability of their financial position."

Concern over living costs was most pronounced on the east and west coasts. More than half of those in the Northeast region are considering a move and 44 percent in the West, with many citing the local cost of living and saying it is no longer worth it due to the pandemic. While home prices have risen everywhere, with about a 6 percent increase nationally, home values have risen much faster in the West. "Job losses continue and are migrating from temporary to permanent," Kapfidze said. "Of all the expenses households face, housing ranks first at 32.8 percent of expenditures. Thus, lowering housing costs can have the largest impact on a household's financial position."