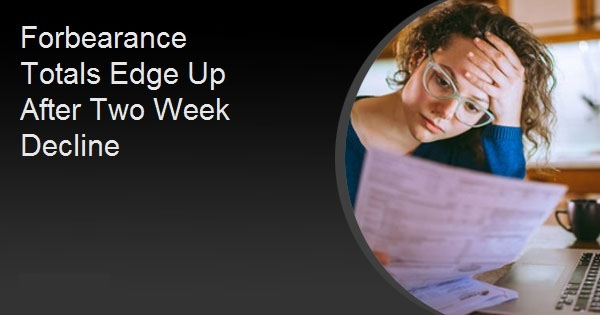 The forbearance plan rolls expanded slightly over the past week, reversing two weeks of falling numbers. Black Knight said the total of loans in approved plans, which had declined by 273,000 over the previous two weeks, rose by 30,000. This brings the number of forborne loans to 2.77 million or 5.2 percent of the country's 53 million active mortgages. Even with this uptick, the situation is much improved from the peak of 4.76 million loans in late May of this year and the number is down by 212,000 or 7 percent just from the same time in October.

The greatest increase over the week was in loans serviced for FHA and the VA, up by 15,000 loans. Loans serviced for portfolio lenders or private label securities (PLS) were close behind with an increase of 14,000 plans while the GSEs Fannie Mae and Freddie Mac added 1,000 forborne loans to their totals.

Black Knight said, "We're used to seeing incremental increases in the middle of the month, with bigger declines usually happening in the beginning of the month as forbearance plans expire."