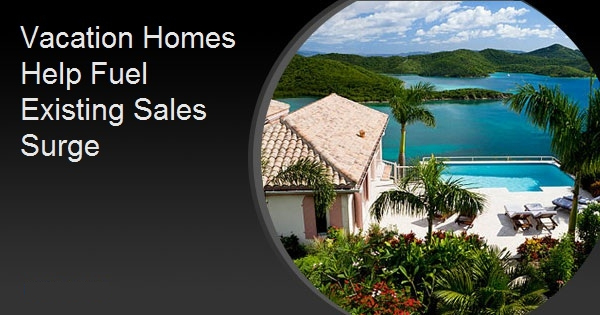 Existing home sales rose again in September and are now blowing the doors off last year's numbers. The National Association of Realtors® says sales of single-family homes, townhomes, condominiums, and co-ops, rose 9.4 percent from August to a seasonally adjusted annual rate of 6.54 million units in September. After four straight months of increasing sales, the seasonally adjusted rate is now 20.9 percent higher than in September 2019.

Single-family home sales rose 9.7 percent month-over-month to a seasonally adjusted rate of 5.87 units and are now 21.8 percent higher than a year earlier. Existing condominiums and co-ops sold at annual rate of 670,000 units, increasing 6.3 percent and 13.6 percent from the two earlier periods.

Analysts had expected sales to remain on a winning streak but were looking for an annual rate of 6.2 million sales. Forecasts of those polled by Econoday ranged from 5.8 million to 6.4 million units, all falling short of the actual number.

"Home sales traditionally taper off toward the end of the year, but in September they surged beyond what we normally see during this season," said Lawrence Yun, NAR's chief economist. "I would attribute this jump to record-low interest rates and an abundance of buyers in the marketplace, including buyers of vacation homes given the greater flexibility to work from home."

There were 1.47 million available homes for sale at the end of September, 1.3 percent fewer than in August and down 19.2 percent from the 1.82 million stockpile a year ago.  The unsold inventory is estimated at a 2.7-month supply at the current sales pace, down from 3.0 months in August and 4.0-months in September 2019. A six-month supply has traditionally been cited by NAR as a balanced market.

"There is no shortage of hopeful, potential buyers, but inventory is historically low," Yun said. "To their credit, we have seen some homebuilders move to ramp up supply, but a need for even more production still exists."

Sales in vacation destination counties have seen a strong acceleration since July, with a 34 percent year-over-year gain in September. Yun says, "The uncertainty about when the pandemic will end coupled with the ability to work from home appears to have boosted sales in summer resort regions, including Lake Tahoe, mid-Atlantic beaches (Rehoboth Beach, Myrtle Beach), and the Jersey shore areas. Additionally, a recent NAR study confirms that many Americans continue to seek new living situations due to the pandemic.

The four-month winning streak extends to all four regions and each is seeing annual price gains in the double digits. The strongest gains were in the Northeast where existing-home sales jumped 16.2 percent to an annual rate of 860,000, a 22.9 percent increase from a year ago. The median price in the Northeast was $354,600, up 17.8 percent from September 2019.